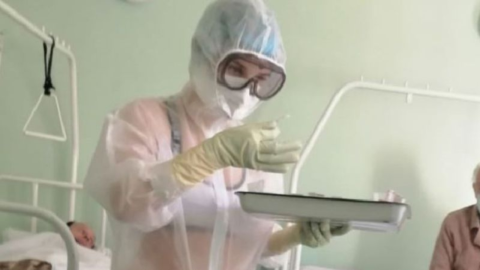 In Russia, a nurse has recently been penalised for wearing a swimsuit under her transparent protective suit in order to beat the heat.

In Russia, this nurse went viral when she was penalised for wearing a bathing suit under her transparent Personal Protection Equipment (PPE).

The nurse, whose name has not been released, was photographed in front of patients at the Tula Regional Hospital, just over 150 kilometres south of Moscow in Russia. She explained herself by stating that it was ‘too hot’ to be wearing lots of clothing and that she did not expect her body to be as visible as it was through the suit.

The story was later picked up by the local newspaper Tula Pressa and the story very quickly went viral. Especially since the young nurse was penalised for ‘non-compliance with the requirements for medical clothing’, according to the Minister of Health in the Tula region. The exact details of the disciplinary action have not been revealed.

Internet users to the rescue

Many internet users considered this sanction unfair and lots of people on social media as well as the Russian media have chosen to support her in her choice.

On Russian news site News Tula, comments have been very mixed. Some people are defending her with ‘humour’, while others seem to be angry about the story. Viwewer, Alexander Filippovich commented: ‘A swimsuit is pretty decent'.

One man called decided to go after the photographer instead:

Why aren’t the police getting involved? They need to bring this photographer to justice for posting this photo without the nurse’s permission!

When you think about it, a nurse dedicating her time to saving lives in the hospital during a global health crisis is something admirable enough to justify ignoring what she's wearing, right?