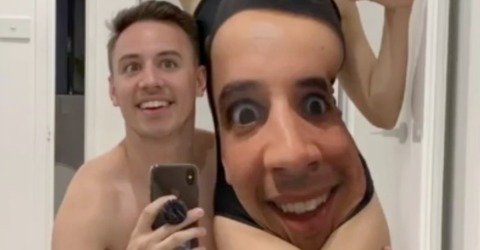 Pedro Cuccovillo Vitola is the former radio producer at the Kyle and Jacky O show in Sydney. Although he has left the show, the young man still has his sense of humor. Pedro has built a real community of Instagram followers and often shares very funny pictures and videos. His fiancée Patty is frequently appears in his Instagram posts as well.

Most of the time, the young woman makes appearances in his videos because they love making prank videos together, documenting hilarious and unusual experiences and jokes. But Patty is starting to become quite the influencer on social networks, too. Unlike Pedro, she shares a lot of videos and photos of herself on vacation, posing in an array of very stylish swimsuits.

So, her cheeky and protective boyfriend, Pedro, decided to prank her. Since she's obsessed with swimsuits, he gifted her one...

In a video that was shared on Instagram, Patty is seen blindfolded in front of a mirror, wearing the swimsuit he bought her. Once the blindfold is off, the pretty brunette discovers her boyfriend's surprise... and her reaction is hilarious! Social media users were very amused by the video, which was viewed more than 7000 times! Watch out, ladies, this video might inspire bae to do the same...

Fortunately, Pedro was just playing around. As a friendly reminder, women are free to dress however they want, regardless of whether they're single or in a relationship.

Check out Pedro and Patty's prank video above!