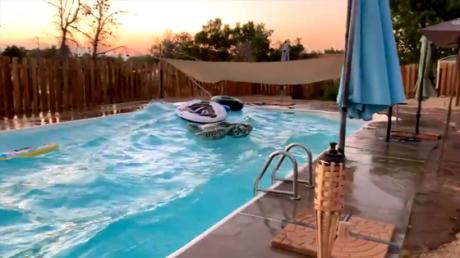 This footage taken of a swimming pool in California during the recent earthquake is chilling.

Last week, an earthquake measuring a magnitude of 7.1 struck California. The tremors caused a few minor injuries for some of the Sunshine State's inhabitants, but thankfully, no one was killed.

Footage of earthquakes that is filmed by the residents always ends up flying around social media and the footage of this earthquake in California is no exception.

The video that you can find above shows the force of this particular earthquake. One American had the right idea and filmed his swimming pool, whose impressive waves are testimony to the power of the earthquake. The video was accompanied by comments and statements about keeping safe during these situations.

‘The potential for danger can’t be underestimated, and residents of Southern California must be prepared in case there are further more dangerous quakes.’

This video was filmed in Ridgecrest in Kern county. David Witt expressed his concern about this strong earthquake in the area, counting themselves lucky that there were no serious injuries.

‘By the grace of God, we’ve had no casualties.’