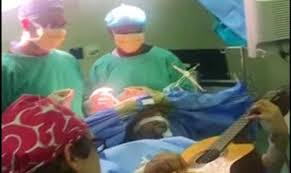 A talented man with a brain tumour has been filmed playing a guitar on the operatiing table in the midst of a delicate brain surgery.

The astounding footage shows a South African guitar instrumentalist by the name of Musa Manzini strumming an acoustic guitar whilst surgeons are performing a complex procedure in removing a tumour from his brain. The musician was undergoing an 'awake crainiotomy', meaning that he was only given local anesthetic before proceeding with the operation.

The aim of Mr Manzini playing an instrument during the operation is a safety measure taken by doctors during this type of procedure, where they implement a technique called cortical mapping, stimulating the brain via an electrical probe. This allows surgeons to ensure accuracy throughout the entire procedure, being able to stop and reevaluate the situation where need by.

Doctors at Inkosi Albert Luthuli Central Hospital in Durban, which is where the surgery took place, emphasised that playing the guitar was a significant factor of the overall success of the surgery, with 90% of the tumour having been removed. Mr Mazini's ability to play his music allowed doctors to ensure all went to plan.

Dr. Basil Enicker, who operated on Mr Mazini, explained: "Our main aim was to make sure that we do the best that we can for our patient." The medical team managed to gather the incredible scene on video, which later circulated the internet. The clip shows one of the members of the medical team passing the patient a guitar while saying 'there you are, do your thing'. Dr. Basil Enicker also reported that Mr Mazini is now on the way to full recovery.

See the phenomenal footage above...