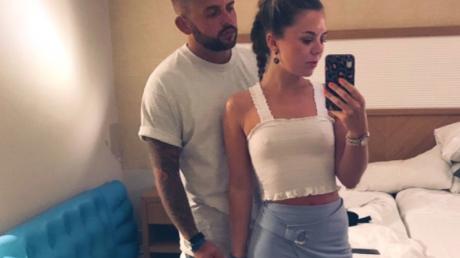 You should always look over your pictures before sending them. You never know what they may reveal. Don't wanna get busted!

It's not the first time, and very likely won't be the last time, that a picture causes a stir. Similarly to what happened to Maison Vallance when she sent a photo to her mother, another picture has now gone viral.

Selfies are clearly here to stay, especially when we're on vacation and want to capture the good times and share them with the people we love the most.

That's what happened to Kelsey, a 22-year-old girl who sent her parents an innocent picture of her and her boyfriend Elliot, without realizing what was right in front of her.

The girl, who works in a hospital, shared the snapshot in her family's group chat, and the girl's father noticed something that left him speechless.

When Kesley realized that she had screwed up, and everyone was making funny comments at her expense, she tried to explain, but nobody believed her.

The young woman herself shared the hilarious misunderstanding on social networks. She also apologised to her father: "Dad, I'm sorry. I won't send you any more pictures of my vacation."

Check out the video above to see the cringe-worthy picture for yourself!