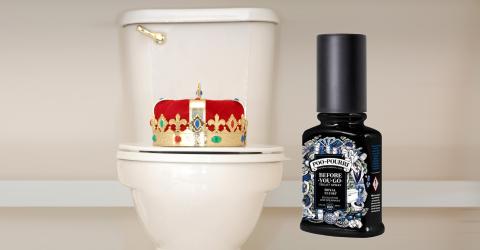 Looking for the perfect gift for a special person in your life that always finds a way to leave the bathroom smelling like a frat house on Taco Tuesday? With just a few drops of this stuff, every flush of the toilet will be a royal one. Enter Poo-Pourri, newly launched in the UK.

Father’s Day is quickly approaching and if you’re anything like me, you’re tired of giving your dad the same gift every year. Chances are, he accepts the gift that you give him with a smile on his face. Let me level with you here, because he loves you too much to let you know: he’s got no use for yet another bargain bin tie or steering wheel cover.

Our dads are good people, they deserve a dignified gift that shows our appreciation of them. They - as well as our mothers - have worked so hard their whole adult lives to provide us with everything we could’ve needed growing up.

So when the man takes a few minutes on the toilet for some release (both physical and mental), he deserves the best experience possible. For those fleeting moments, that toilet becomes his throne. Lucky for us, there’s a product you can pick up that’ll make his private time glorious.

The all-too-aptly called company Poo-Pourri has released their new product ‘Royal Flush’, a pocket-sized toilet spray that gets rid of, ahem, ‘bathroom odours’ before they even start. A few sprays of the stuff before sitting down to drop the kids off at the pool will create a thin layer on the water’s surface. Once that’s done, it’s game time.

If you’re thinking to yourself ‘why not just use that trust aerosol spray I’ve got sitting by the sink?’, let me tell you: this stuff is better. It’s made of natural essential oils, it doesn't disperse in the air immediately making you feel like you’re choking, and actually smells like what it says it is. Think the smells like mint? Spoiler: it’s because there’s mint in it.

In addition to Royal Flush, they’ve got a bunch of other scents you can look into. My favourite ones (based solely off the names): Ship Happens and Déjà Poo.

I know that gift-giving isn’t supposed to be a selfish act, but think about it this way - this is a gift that benefits not just who you’re giving it too, but yourself as well. Think about it: what’s the worst part about hitting the toilet after someone had been in there doing the deed? The smell. This gets rid of it, so all that’s left is a warm seat. Making the world a better place starts at home, and this is the best way to do so (don’t quote me on that).

So if you’re interested in giving the stuff a go, you can check out their site here. If you’re too late to pick it up for Father’s Day, no worries - I’m sure you know plenty of other people that could benefit from this stuff. But definitely not you, of course not.

This post is not sponsored by Poo-Pourri. Gentside receives no commission in exchange for this article.

#funny#gifts
No connection
Check your settings