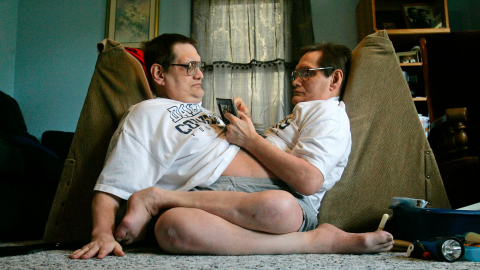 Ronnie and Donnie Galyon, the world's oldest conjoined twins have passed away today after a long 68 years together.

Conjoined twins Ronnie and Donnie Galyon have recently passed away at the Dayton, Ohio Hospice where they have been staying since last Wednesday.

The pair were the world's oldest conjoined twins, living to the age of 68, well beyond their life expectancy. The pair earned their title from Guinness World Records back in 2014, just before their 63rd birthday.

Prior to their Hospice accommodation, the twins were laid up with their brother Jim for ten years. being somewhat of local celebrity status, the twins once received over 200 volunteers to help build an extension on Jim's house. Jim stated:

I am grateful to the community for what they did to help Ronnie and Donnie move into their house. This allowed them to live with their family for the last 10 years.

Ronnie and Donnie were born back in 1951 to parents Wesley and Eileen Galyon. The Galyon twins spent two years in hospital after their birth as doctors tried their best to figure out if they could separate them. Together, Ronnie and Donnie have four legs, one navel, one bladder and share one set of male genitalia.

Eventually, doctors decided that the twins could not be separated and they spent their youth performing in circuses and carnivals to earn money for their family before retiring in 1991.

Since their birth technology and medicine had come a long way and Ronnie and Donnie were questioned about the possibility of finally being separated. The close twins who were literally stuck like glue told the media:

The good Lord made us. Let our savior do it.

Jim has clarified that the Montgomery County coroner believes that the confined twins passed away from natural causes on the 4th of July.