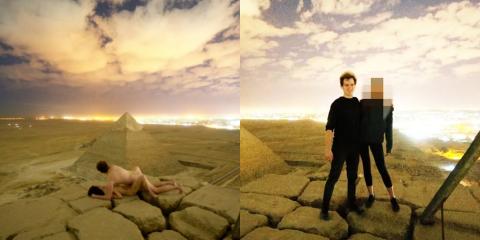 Danish photographer, Andreas Hvid has drawn all kinds of attention to himself when he posted a pictoresque image of himself and a female parter-in-crime literally boning atop of the Great Pyramid of Giza in Egypt - must have been the pharaohmones...

Has tourism has gone too far? An incredibly controversial image had been released by the photographer himself, Andreas Hvid. The young man had also released footage of himself and his female friend climbing the Great Pyramid late in the night before reaching the top. The video ends with his female accomplice taking her top off.

The image itself features both of the parties in the photo, as they're lying together in a missionary position appearing to have intercourse. Whilst many have started questioning its authenticity, pinning it down to being too bright to be taken during the night, whilst other claims have been referring to the mismatched structure of the pyramid itself pictured in the photo.

It wasn't long before the Egyptian authorities got hold of the image online, as they began conducting a full-blown investigations on the grounds of violating public morality in a highly conservative, Islamic country.

Hvid denied actually having intercourse atop the renowned ancient landmark following the widespread backlash he received in response to his content. Many branded his photography a severe disrespect to the Egyptian religion and ancient civilisation as the pair posed nude in the image. The young photograoher expressed his feelings about the situation, "I'm sad that so many people have become so angry. But I have also received a positive response from a lot of Egyptians - something I think is worth remembering."

The Great Pyramid of Giza is considered one of the greatest of the seven wonders of the ancient world, now standing for over 4,500 years. It remains strictly forbidden to climb it, with visitors only being permitted to climb to a certain level before 5pm.