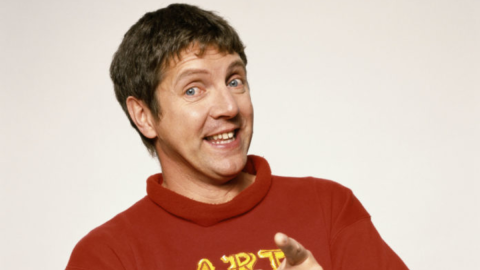 Conspiracy theorists have long been trying to uncover the real identity of Banksy and they now believe the illusive artist could actually be Art Attack presenter Neil Buchanan.

Just think about it, it's really the perfect disguise. A controversial yet poignant artist like Banksy hiding right under the nose of the public as the presenter of an art show designed for children.

Bansky fans have been hitting up social media with comments pinpointing the 58-year-old as the real Banksy. One person commented:

They say not to believe everything you read online but I 100% believe this. Don't even need to look up the cities for confirmation. Neil is Banksy, Banksy is Neil.

Another fan desperate to believe the rumours stated:

I am now fully committing to this. it'll be a cold day in hell when I am convinced otherwise.

However, Buchanan's official website has recently released a statement completely denying the rumours. The statement starts off in bold, red writing: 'Neil Buchanan isNOTBanksy.' But, this of course exactly what Banksy would say to protect his identity. The statement continued:

We have been inundated with enquiries over the weekend regarding the current social media story. Unfortunately this website does not have the infrastructure to answer all these enquiries individually, however we can confirm that there is no truth in the rumour whatsoever.

Then as expected the statement came up with the perfect alibi for the artist claiming that he had spent lockdown inside with his family just like everyone else...That's not suspicious at all.

Neil spent Lockdown with vulnerable members of his family and is now preparing to launch his new art collection in 2021. Thank you and please stay safe.

If Buchanan isn't Banksy then who is? Many fans over the years have tried to decipher the identity of the artist and many conclusions have been had but of course, none of them have ever been confirmed.

One journalist, Craig Williams, once carried out a five-month investigation and concluded that Banksy must be Massive Attack's Del Naja. The theory was that the art was run by Del Naja but a team of artists actually helped to carry out the work.

A man named Robin Gunningham has also been named as Banksy through scientists who conducted a study with geographic profiling.

But again, these are all just speculation and nobody knows who Banksy is for sure.