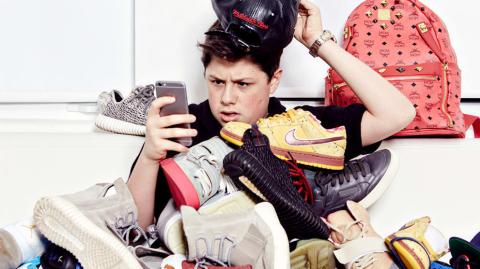 Benjamin has only just turned 18, but he already runs a small empire, that he has built… from just a few pairs of trainers! Known as 'The Sneaker Don', this teenager has been passionate about shoes for 10 years and has even created a very profitable business, by marketing them online for his very fancy clientele.

'I started as a hobby when I was 13. And my parents just didn’t want to support it at first. So I just had to resell sneakers to make money to buy myself more sneakers. I told myself that if I resold like 5 or 10 pairs to a handful of people, I could widen my market and make more money and then have my new shoes almost for free,' explained the teenager in a mini-documentary that came out in 2016.

And even though his passion means he can have the shoes of his dreams for free, this business has also meant he can get in with the A-Listers. Even stars as big as DJ Khaled and Chris Brown have been impressed with Benjamin’s abilities to find any pair of trainers in less than 24 hours and are now some of his main clients.

But today, the teen’s dream is even bigger. He has opened his first physical point-of-sale in Miami and hopes to continue growing his business. 'I’m looking forward to opening my first shop in Miami. And then we’ll ship to Los Angeles, New York and Chicago.'