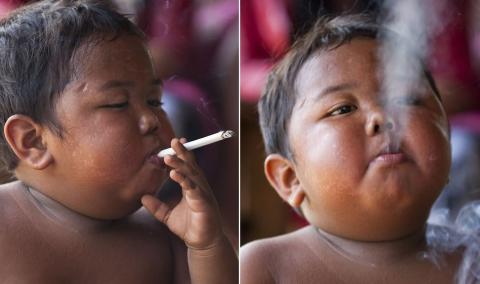 You may have seen photos of this kid from ages ago as it was making the rounds on the net. Doctors were worried about his health due to his cigarette addiction and subsequent obesity at just two years old. The little boy has since made a complete 180.

In 2010, the bizarre story of a 2-year-old child was making waves on the Internet. The Indonesian child, Ardi Rizal, was known for something that set him far apart from all the other kids at nursery school: he was a smoker. That may be a slight understatement: he was known for chain-smoking 40 cigarettes a day.

One vice for another

Thankfully, the young ladfound a way to kick the habit. However, he soon replaced one vice with another. Instead of tobacco, Ardi turned his attention to food. Not long after, the boy ended up eating himself to obesity.

But this young boy won't give up. He has recently adopted a special diet consisting mainly of fruits and vegetables in the hopes of slimming down to match the size of his peers.

Check the video above to see his incredible transformation! A true inspiration.