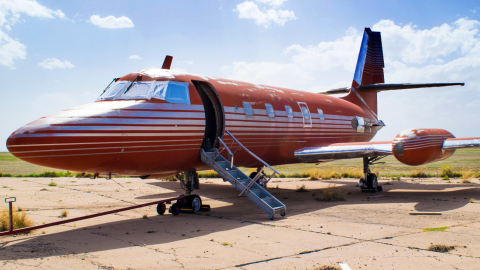 The private jet of the King of Rock and Roll has been sitting idly for nearly 40 years now collecting rust. One anonymous person has decided to purchase the luxury jet, and we’ve got to take a peek of the inside...

Sold for a tidy sum to a buyer who wishes to remain unnamed, Elvis Presley’sprivate jet has finally found a new owner. This beauty isn’t ready to hit the skies just yet, however – the buyer is going to have to drop a bit of coin to renovate it after decades of inactivity.

While at the time this jet was certainly apt to transport royalty such as The King himself, 30 some odd years of rusting on a runway in Roswell, New Mexico has left this Lockheed Jetstar looking a tad worse for wear.

Now while the interior may be on point, featuring armchairs in velvet and marble sinks with accompanying gold faucets in the bathroom, the aircraft no longer possesses neither engines nor any functional instruments in the cockpit. More or less, this means the jet is missing the components necessary to actually fly.

Purchased for the equivalent of £317,000 by an anonymous but surely wealthy individual, this jet was a project between both Elvis and his father, who helped him decorate the interior.

While the mechanics certainly need work in order to get the jet up and operational, the new owner may elect to conserve the current state of the interior in order to immortalise a piece of rock and roll history. Who knows, maybe they’re an Elvis fan?

Check out the video above to see inside Elvis' jet for yourself!