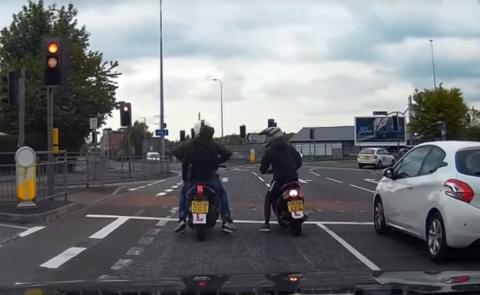 This dramatic video from Manchester shows just how good at their job the UK police are.

The UK has recently experienced a sharp rise in moped crime, where thieves mount pavements to snatch mobile phones from pedestrians. One former moped gang member admitted to The Telegraph last year that he could make up to £2,000 a day and that there was a certain 'buzz' behind thieving. The police have warned that people must be vigilant at all times, especially when using their phone in busy areas such as tube stations, shopping centres and concert venues.

The problem is especially serious in big cities such as London and Manchester. This dashcam footage shows two undercover police officers taking down a trio of moped thieves at a busy roundabout in Moston, Manchester.

Seeing how expertly the police swoop in to apprehend the thieves is a reminder of how hard our police force work to keep us safe. Nice job!