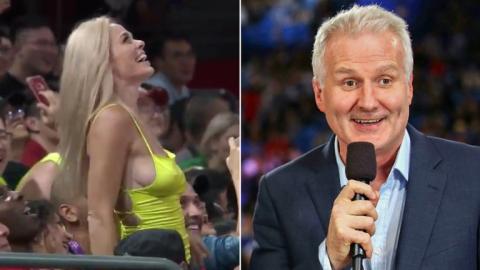 The Basketball World Cup game between the United States and Brazil led to quite an amusing scene being broadcasted on American television.

In basketball, and indoor sports in general, supporters are often put on the big screen during the breaks to amuse the audience.

We’re sure you’ve heard of the famous Kiss Cam, which can be quite saucy, and there’s also those crazy dances that fans do in the crowd… In short, they’re kept busy!

But this can also be a problem for some commentators. While they should be staying focused on the game and providing relevant analysis during the gameplay and the breaks as well (especially in basketball), commentators do also have to be careful with what they say.

He slipped up on air

The problem is that these commentators only see what the cameramen film during the game. And when they linger on a particularly beautiful member of the audience for example, it can lead to some rather legendary television being produced.

And the famous American commentator for Fox Sports, Andrew Gaze, knows this all too well. During the showdown at the Basketball World Cup, which is largely dominated by the USA, the camera fell on a beautiful Brazilian supporter dancing in the crowd.

That’s when Andy completely lost his focus and forgot everything he was saying… stumbling and fumbling through his commentary, you can almost picture the look on his face as he stares at the screen. Coincidence? We think not!