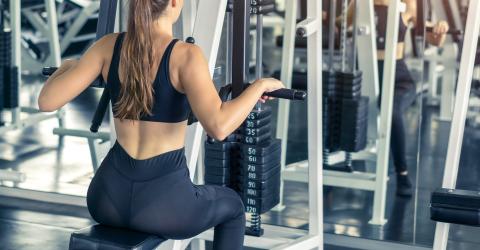 A woman's picture has resurfaced recently and is going viral. The woman is visibly at the gym but that is not what's grasping media attention.

Yet another day on the internet

The internet is full of crazy optical illusionsshowing things that don't seem possible or just completely out of this world and people are constantly sharing their new discoveries, challenging their friends and other internet users to come up with their own explanation as to what is really going on.

This little detail has caused quite a heated debate among internet users. This woman’s foot somehow turned the other way around while she was at the gym, which seems physically impossible, even in a place like this where people often push themselves to their limits.

People have managed to come up with several explanations online. The most common among them is that there is a mirror hidden somewhere in the room which is actually only showing a reflection of her foot. Another theory, although not as plausible, is that the woman has an artificial leg. But lots of people believe it’s a trick, a simple matter of photoshop.

This photo went viral in 2015 and since then, no one has been able to come up with a rational explanation for what was going on.

To get a closer look at what is driving us all mad, check out the video above!