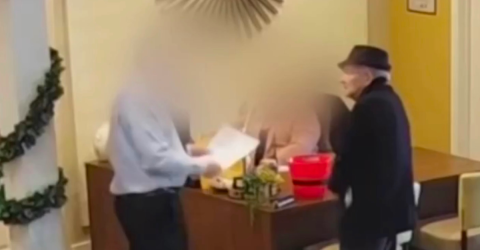 Warning! The video above shows the graphic content of a man being shot twice. Luckily the victim’s injuries were none life-threatening. The assailant was arrested.

Earlier this week Robert Thomas, a 93-year-old tenant walked into the management office of his apartment complex with a hand full of valid complaints as well as a loaded Glock 19 handgun.

Thomas came to the office to complain about flooding and water damage plaguing his unit in Vista Del Valle Apartments in Las Vegas, however, just a few moments into the confrontation the scenario ended up escalating quickly after the elderly man pulled a pistol from his pocket.

As you can see in the footage, Thomas initially is talking with the employees until he pulls out a chair as if to tell the standing man to take a seat, followed by the slow draw of his concealed weapon which prompts the man to do as asked.

The man fires an initial shotthat flies across the room and through a nearby computer screen. Which prompts two individuals to flee the scene. The elderly man is left in the room alone with the seated man who must have been too terrified to move.

At this point, Thomas takes his first shotat his victim which hits him in the leg. The victim falls to the ground and Thomas walked around the desk standing over the victim looking like some kind of executioner, this is when he fires his second shot into the victim’s leg.

After standing over his for a few more moments more, a local police officer managed to get to the scene and make the arrest before any further damage was caused.

Luckily the victim, who remains unnamed received non-life threatening injuries and was treated and later released from the hospital.

The elderly man is being held without bail until he makes a court appearance on charges of attempted murder, kidnap with a deadly weapon and carrying a concealed weapon, burglary with a firearm and discharging a firearm within a structure.