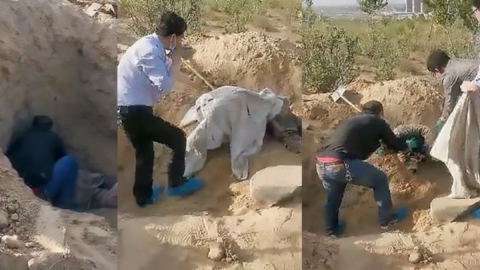 A man from northern China was charged with attempted murder after he confessed to police that he intentionally buried his mother alive in an abandoned grave.

Ma, the 58-year-old man is being charged after he left his mother for dead buried under a large amount of loose dirt. According to police, the man's wife stated that he took his mother from the house on the night of May 2nd in a wheelbarrow.

After she failed to return home 3 days later, the police were tipped off by his wife and Ma was detained for questioning and investigation. Allegedly, Ma committed the act after he had grown too tired for caring for his mother who was paralyzed.

Public assistance in China is particularly lacking, especially in the more rural areas of the country. Only under the most desperate measures could we imagine someone would be able to do this to their own mother.

Wang, the 78-year-old woman, was found after 72 hours of being buried when police were able to confirm her location when her son admitted to the crime. She was found traumatized but surprisingly alive.

In the video above, you can see men digging a holeunder what seems to be a tremendous amount of dirt. According to reports, the rescuers stated that as they started to uncover the women, they could hear faint cries for help letting them know she was still alive.

Finally, they are able to recover the woman who shows signs of life but is ultimately covered by a blanket as to shield her from the light she hadn't been able to see in 3 days, she has since been said to be in stable condition and is recovering in the hospital.