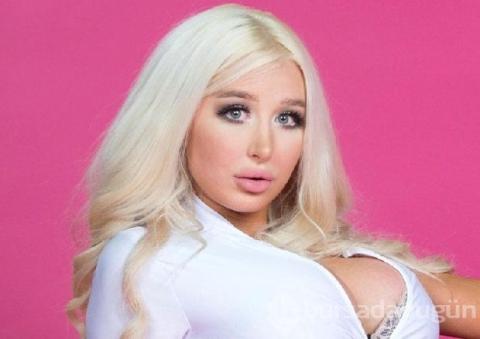 After her third breast augmentation procedure, 22-year-old Amanda Ahola had suffered a seizure and fell into a coma that lasted days after the surgery. Proclaiming that 'surgery is better than sex', the Finnish webcam model continues her quest to become a 'real-life sex doll'...

After becoming aware of the power of plastic surgery at no older than nine, Finnish model Amanda Ahola was just 18 years old when she travelled to Estonia to have her very first procedure - breast augmentation: "Getting implants was one of the best days of my life, but they were not as big as I wanted," she explained on E! series, Botched. "My ultimate dream is to be a real-life sex doll because all the womanly features are perfectly exaggerated," the model added.

Four years later, Amanda has undergone her third boob job that has taken her up to an astonishing size of 30GG, after starting at a B cup before cosmetic surgery. Alongside her quest to enlarge her chest, Amanda has racked up a rhinoplasty procedure as well as numerous lip fillers and Botox injections, with an approximate expenditure of 51,000 dollars - and counting.

Risking her life in pursuit of perfection

Whilst at the peak of her passion for plastic surgery, Amanda didn't go unscathed in the process after her third breast enlargement procedure resulted in a seizure. She was left her in a coma for several days whilst having suffered swelling in her brain - a condition which can cause irreversible damage or even death.

"The doctors told me that it's the anesthesia that is the problem," Amanda recounted. Despite the terrifying ordeal, the model's drive for plastic beauty didn't waver, "I was really closer to dying but even after the near-death experience I'm still as addicted as I ever were to plastic surgery."

A sugar daddy as a helping hand

Amid pursuing her passion for cosmetic surgery with her addiction at its height, Amanda managed to get some online help when it came to the expenses that piled on boob job, after boob job: a sugar daddy, who paid for third boob job.

"I have never met my sugar daddy. I've only spoken to him on the phone. Obviously, if someone wants to pay my bills or surgeries and is content to not having a physical relationship with me, that is fine," she explained in another interview with Barcroft TV back in 2017.

Amanda hasn't stopped pushing her boundaries and hopes to continue her dream of transforming into a real-life doll as her story unfolds on the latest E! series which takes an remarkable insight into the pitfalls of plastic surgery.