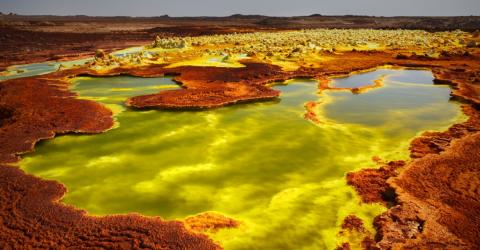 Although a lot of people see travelling as a hike in the mountains, paddling your feet through the water in the Maldives, a siesta on a sun lounge in the Dominican Republic, the reality can be very different. There are places on our planet that are very risky and perilous to visit.

Located in California, in the United States, this desert is quite special. The temperature is the hottest that you’ll find anywhere in the world, being recorded at 56.7°C in 1913. If you ever find yourself here without water, you’ll only have 14 hours to live…

The United States is definitely known for breaking records. Mount Washington is known for having the strongest winds in the world, no less than 327 km/h to be exact. With a temperature of -40°C and also being covered in snow, we can’t think of a single reason to go there.

Imagine an island with 5 snakes in every square metre of land. What a nightmare! The worst thing about this is that the snakes are one of the most venomous in the world, Bothrops. The lighthouse on this island now works automatically since all previous inhabitants were killed…

This volcano is what is known as hyperactive. It has never been inactive and causes destruction and damage almost every year. And it’s not just the lava that causes these problems as you might imagine, but also the gas and ash that is ejected 2,500m from the volcano.

Another valley of death? Yes, but in Russia this time. But it’s not heat that is the issue here, it’s the toxic gas. There are no plants or animals here, simply because they can’t survive the conditions. A human would start to feel the disastrous effects of this valley after just a few minutes of exposure.

This is a magnificent island with fine sand, turquoise blue water, palm trees… paradise! But not really. The United States has used this island in the past to test nuclear bombs, so the area has such an extremely high level of radiation that we couldn’t be there without developing a fatal condition such as cancer.

With almost constant earthquakes, an active volcano with two lakes of lava in its crater, we don’t think you’d need any more reasons to stay away from this area.

#phenomenon
Contact
To ensure that we can best respond to your question, please choose your desired department
No connection
Check your settings