Not too long ago a 300-metre-long cobweb-covered a beach in Greece, a similar phenomenon has occurred in the country yet again - this time around a lake that has been invaded by webs extending over a kilometre long.

Recently, the scenery at Lake Vistonida has an eerie look to it. A kilometre-long spider's web covers the banks and some points of this stretch of water, located in the north part of Greece.

According to experts, this phenomenon is caused by the increase in the number of Tetragnatha, a kind of spider that lives on the edges of streams and lakes. These arachnids, recognizable by their elongated bodies and legs, feed on mosquitoes and insects, which are currently in abundance in Greece with this unusual and unseasonal heat.

Thanks to this, spiders find more types of prey to eat and thus reproduce faster and in greater numbers. They then weave their web to mate, but because the number of invertebrates has exploded, the mashing up of these webs makes for such an impressive spectacle.

A web that is one kilometre long and ten metres wide

Thus, along the road along Lake Vistonida, the webs reach one kilometre long and up to ten metres wide in certain places. Nothing is spared, for spiders do not preoccupy themselves with permits or other such human inventions. Plants, fences, even a small chapel found itself covered in what appears to be a movie set.

And with the weather conditions not seeming to change for the next few days, things won’t stop there. ‘Weather conditions are ideal for spiders to multiply,’ confirms biologist Euterpe Patetsini on local TV Alpha TV.

A species of spider that loves water

The sheer size of the phenomenon establishes it as an accomplishment – indeed, the animal itself is only a few centimetres long, but as we have seen presents some remarkable peculiarities. One of those is being able to lie down completely, its front paws positioning themselves in front of its head, allowing it to masquerade as a blade of grass in case of a predator attack.

This spider even has the ability to walk on water but is completely harmless, for humans or for the surrounding species. Actually, it is even rather beneficial to man since it gets rid of mosquitoes by eating them.

A known phenomenon, but never in these proportions

Greece is particularly prone to this kind of phenomena lately because a month ago, Lake Aitoliko, located in the west of the country, had witnessed a similar phenomenon. This time, the giant canvas was 'only' 300 metres long.

This phenomenon is not new since it occurs every year, but it was particularly favoured this year by the high temperatures and the rich insect populations that followed. 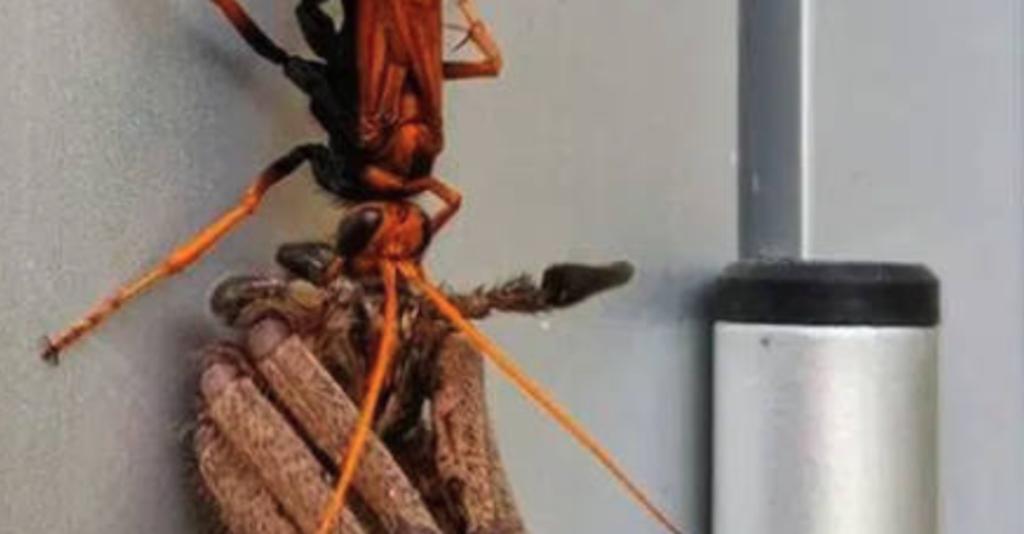