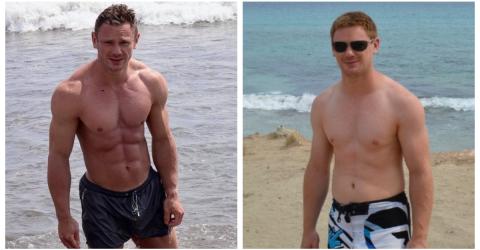 Following a horrific work accident, one man was left questioning if he would ever walk again. Now 10 years later, he’s not only walking, but smashing all of his fitness goals. Check out the video for this amazing transformation and see below for more on his current routine!

In 2008, Chris was involved in a serious work accident which left him severely injured, losing everything. He attempted to pull an 8ft x 4ft sheet off the wall which resulted in all 17 of them falling on top of him, leaving him trapped under 380 kilos of timber.

Chris’ L4 and L5 vertebrae were shattered beyond repair and a kidney had to be removed due to irrecoverable damage. Chris explained, “I had to teach myself to get in and out of a car again, to bend, to sit, to stand, to walk more than 100 yards unassisted...”

Chris had lost it all, "I went from being very independent... to basically going back to live with my parents, I had to temporarily close my business, and the relationship I was in at the time ended because she didn't want to be with someone who could potentially be disabled."

Despite the fact he originally feared he would never be able to walk again, two years later, Chris was out of his wheelchair and back to normal life.

Elliott Upton, a personal trainer and the head of online training at Ultimate Performance revealed, “the most efficient and effective ways to transform your body is to use full-body workouts that utilise paired sets or ‘supersets’."

By using a technique called German Body Composition Training, the team at Ultimate Performance tend to “prioritize the big ‘compound’ exercises ahead of smaller ‘isolation’ exercises”.

Chris aims for three 45 minute workouts per week while also following a personal guide and diet program supplied by Ultimate Performance. The routine is hard and intense but most importantly, quick and manageable.

“My training is generally very early in the morning. I usually get up at 3:30 am and get to the gym for 4 am and train before work… Getting up so early is my alone time when I can get stuff done – no emails and no phone calls.”

Speaking of his trainer and experience, Chris recalled, “I have followed UP and Nick Mitchell for years and I’ve always been intrigued by the transformations. They do look too good to be true, but until you live that experience it’s hard to explain to people how that is achievable.”

Check out the video to see Chris’ amazing transformation for yourself, then click here to kickstart your own fitness journey!

#fitness#stories
Contact
To ensure that we can best respond to your question, please choose your desired department
No connection
Check your settings