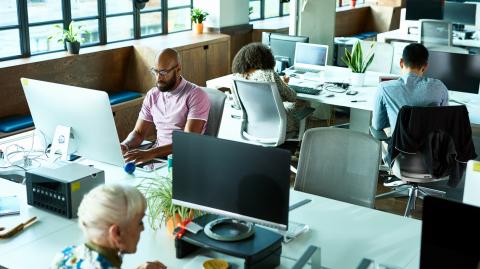 Ssupposed to increase productivity and promote communication, working in an open space weakens the mental health of employees with anxiety struggles.

Conceived by the German brothers Eberhard and Wolfgang Schnelle in the 1950s, the ‘office landscape’ had everything that would appeal to employees working in the tertiary sector: partition walls, direct communication with colleagues, working together without any hierarchy... While open-plan office spaces are very successful in the United States, they only became popular in Europe in the 1980s, as companies wanted to reduce costs. But today, the 16% of employees working in open spaces are far from the Schnelle brothers’ idealistic vision, who wanted to create a friendly and convivial space.

The problem? Other people

Open-plan offices quickly became a source of anxiety: incessant noise, unpleasant smells, distorted lines of communication, the feeling of being spied on, etc. When the partitions are removed, privacy is no longer respected and there is a constant source of pressure. All these disruptive elements then increase employees' psychological burdens, which may be at the origin of an unexplained collective syndrome. This syndrome manifests through neurological, dermatological, and/or digestive symptoms that occur collectively and whose origin has not been established. In other words, a sort of ‘group phenomenon’ without any rational explanations, exacerbated by this excessive proximity in the workplace.

Being able to isolate oneself is therefore essential in order to recreate a healthy space, favouring concentration and productivity, since according to an American study made by the Gensler architecture and design agency, working in an open space leads to a drop in productivity of more than 60%. Are open spaces doomed to fail? Once can only hope so.

Study Shows That ‘Long COVID’ Could Actually Be a Combination of Four Syndromes...
Read also
No connection
Check your settings