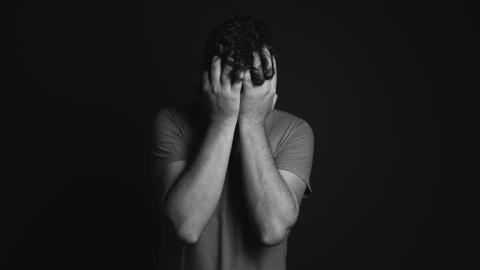 The pandemic hasn’t been easy for anyone, and a recent study has found that it has caused 58% of men in the UK to look at their bodies negatively.

Campaign Against Living Miserably (CALM), a suicide prevention charity in the UK, has partnered up with Instagram to raise awareness aboutmental health issues faced by men, particularly when it comes to body image.

As a part of their collaboration, they are launching a new series called CALM Body Talks, a series that hopes to start the conversation around male body image. They said:

There’s a huge body positivity movement across the internet and IRL, but it’s pretty clear men don’t really feel part of it. Here at CALM we’re always harping on about talking, and, spoiler… this is no different. Talking about the stuff we have in common, and the stuff that gets us down, can make us feel less alone, less alien, less, well, crap.

In an attempt to get a better understanding of how many men are dealing with this issue, CALM and Instagram conducted a study with 2,000 males between the ages of 16 and 40. According to the results 48% of the respondents were found to be struggling with body image and 58% said they've been looking at their bodies negatively since the pandemic. 21% didn’t feel comfortable talking about their feelings on body image, and only 26% were happy with their body.

Moreover, around half of the respondents agree that mainstream media and social media platforms are the reason behind their insecurities, and a further 54% believe that the men they 'see in the media are not representative enough.’

CALM reported that during the first coronavirus lockdown, they were receiving 40% more website visits and helpline calls from 16 to 24 year-old boys, and the organisation’s CEO thinks that social media definitely had a part to play. Simon Gunning said:

Unquestionably Instagram has caused the pressure for adolescent boys to be big and muscly, it is unhealthy and unattainable.

This campaign tackles the issue at its core, body image on Instagram.

Body image issues are massively prevalent in women and girls. The same pressures apply to men but we don't discuss it in the same way—the way we portray body image for men is decades behind. There is no debate for men on this topic.

The Smell of Coffee Alone Could Stimulate Your Brain, Study Finds