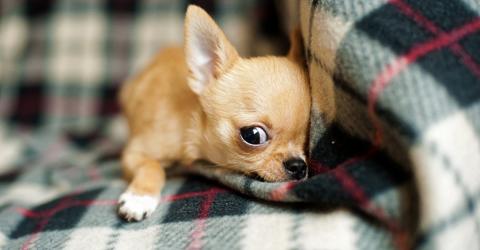 It’s not just humans who can be insecure about their size. Dogs can also be faced with a Napoleon complex. According to a new American study, our four-legged companions have found a rather original way to cope with this problem.

Everyone is well aware that when a male dog pees, it’s generally not just for the sake of emptying its bladder. Through this behaviour, the dog leaves an olfactory trace which gives detailed information to its fellows, informing them of his gender, size and age. With their particularly developed sense of smell, dogs use these precious facts to communicate between themselves in order to know who they are dealing with.

However, everyone also knows that not all dogs are in the same boat when it comes to size. While some breeds have an imposing height, other dogs such as poodles, bichons or Chihuahuas rank in a lower category.

To compensate for their lack in size, these small dogs seem to have found an unexpected trick recently brought to light by researchers at Cornell University in the United States. According to their findings, some dogs try to aim higher when they pee in order to trick fellow dogs into thinking they are bigger than they really are!

To reach this conclusion, the specialist Betty McGuire and her colleagues went to walk several male dogs from a shelter and filmed them with a smartphone or high-speed camera while they were urinating. More precisely, they became interested in the angle that the dogs raised their paw and compared these observations to the mass and size of the specimen.

The result: the researchers not only found that small dogs pee more frequently but also that they raise their paw at an angle which is proportionately higher than that of larger dogs. By peeing higher these featherweight pooches were trying to seem bigger in size to make an impression on the biggest, specialists suggest.

‘Small adult male dogs may place urine marks higher, relative to their own body size, than larger adult male dogs to exaggerate their competitive ability,’ confirmed Betty McGuire, co-author of the study published in the scientific review Journal of Zoology, in conversation with New Scientist: ‘they seemed to make an extra effort to raise their leg high—some small males would almost topple over.'

A study which has its limitations

This study sheds new light on dogs’ behaviour and lends new results suggesting that small and large dogs do not necessarily behave in the same way. Nevertheless, the scientists highlighted that their study, which was conducted with a restricted sample, included some limitations and could lead to other interpretations.

They suggested for example that these observations could be explained simply by the fact that large dogs cannot raise their paw as high as small dogs. Additional research is necessary to confirm this behaviour, even though it’s not the first time that it’s been observed in the animal kingdom.

Other animals are known for sending false signals which suggest that they are bigger than they really are. According to a study which appeared in 2012, this is the case with dwarf mongooses, who do handstands to leave scent marks higher than their size would normally permit.