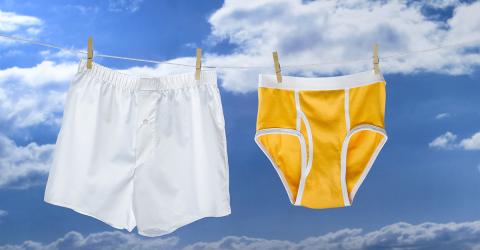 17 years. 650 men. Finally an answer to the age old question: boxers or briefs? The choice is actually much more important than we had anticipated.

Do you prefer briefs or boxers? Although it might seem like a trivial question, it hides a more serious issue at stake for men’s health: sperm quality. The effect of testicular temperature on the production of sperm has been known for a long time already, and makes fitted underwear the prime suspect when sperm quality deteriorates.

Despite this suspicion, the results of several studies led specifically on the question of how briefs, boxers and other types of underwear affect sperm count remained contradictory until now. But studies led recently have finally shed light on this issue which has always been of interest to men.

Published this week in the review Human Reproduction, this study is one of the first to analyse a group so large for the purposes of finding the link between sperm count and the type of underwear worn by men. Between 2000 and 2017, researchers questioned no less than 656 men in their thirties who attended the Massachusetts General Hospital for reasons of infertility.

As well as giving sperm samples and having blood tests carried out, every participant in the study responded to a questionnaire concerning clothing choices, or underwear choice to be precise. The result: 53% of men said they usually wore boxers.

Whether they preferred roomier or more fitted underwear, overall the participants had an average sperm concentration which was within the norm, established at 15 million sperm per millilitre of semen. Nevertheless, the results were more favourable to those who chose boxers.

The advantage for those who wore boxers

The researchers measured an average sperm concentration which was 25% higher, while the number of motile sperm per ejaculation was 33% higher. It was a trend which was preserved even when other factors leading to sperm degradation were involved (factors such as obesity, lack of physical activity, smoking and even overly hot baths).

Besides the findings concerning sperm, the researchers also noticed a difference on the level of the hormone called ‘follicle stimulating hormone,’ (FSH) which influences sperm production. Those who wore more fitted underwear had a higher concentration of the hormone, which suggested that the body was trying to counter the decrease in sperm. The theory is yet to be confirmed though.

‘These results point to a relatively easy change that men can make when they and their partners are seeking to become pregnant’, says the principal author of the study Lidia Minguez-Alarcon, who is researcher at Harvard T.H Chan School of Public Health.

A scientific controversy which is far from being resolved

Nevertheless, other scientists advise taking these results and their interpretations with a pinch of salt. ‘I don't know that I would recommend [switching] based on this study,’ said Sarah Vij, a urologist at the Cleveland Clinic in Ohio in the United States, who did not participate in the research.

'Does [a weaker concentration of sperm]  actually translate to a lower ability to cause a pregnancy, We always struggle in our field to make that leap,’ says the specialist. This reserve is shared by doctor Michael Eistenberg, who is director of medicine and reproductive male surgery at the faculty of Medecine at Stanford University.

‘I generally counsel men that they can choose the type of underwear that is most comfortable,' Eisenberg told Live Science. 'But if they do feel warm or constricted, then another type may make sense,’ concedes Eisenberg, a scientist who has also published a study on the subject.

Eisenberg’s study, conducted on around 500 men and published in 2016, made the conclusion that there was no link between men’s underwear choice and the time necessary for couples to conceive a child. So the boxers vs. briefs debate is very much still open!