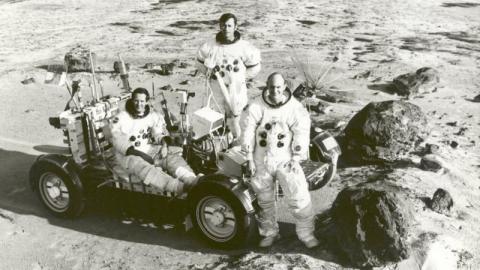 The Internet is having a meltdown: this photograph of NASA astronauts revived several conspiracy theories. But things aren't always as they seem.

If you scroll through conspiracy theory websites or social networks, particularly the Facebook group "The Flat Earth Revolution", you probably stumbled upon this post: a photograph of three astronauts from the 1972 Apollo 16 mission.

This picture is currently fueling a number of theories. The flat-earthers who are a part of this Facebook group are amused by this photo for several reasons: the astronauts aren't wearing helmets and their vehicle appears to be unsuitable for the moon.

Conspiracists are using these small details to assert that man has never walked on the Moon. A theory that is implied by this popular Facebook post, which has been shared more than 1,700 times. So, AFP Factuel investigated the matter, to uncover the truth.

Journalists traced the origin of this photograph to NASA's Flickr. NASA's caption reads: "The Apollo 16 prime crew — from left to right, astronauts Thomas K. Mattingly II, command module pilot; John W. Young, commander; and Charles M. Duke Jr., lunar module pilot — chill on the NASA Motor Vessel Retriever." The explanation is therefore simple: the astronauts were not on the Moon, but rather practicing at the Kennedy Space Center. Case closed.