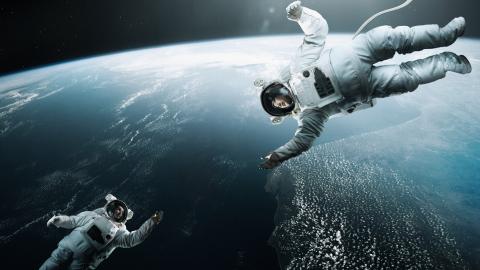 Just how do astronauts do their business in space? American researcher and blogger, Hank Green, gives us the low down on zero-gravity toilets.

In his videos, the biochemist Youtuber gives us everything you need to know about the methods of going for a number 2, in zero gravity.

‘As you can imagine, it’s a little tricky’, says the Youtuber, as an introduction. First issue: the size of the room and toilets. Obviously, if a regular toilet bowl on land is on average 30 to 45 centimetres in diameter, it’s impossible to have the same sized ones on the space station. Instead, the spatial toilet bowl measures at around 10 centimetres in diameter. To position themselves on the toilet and stay on,astronautshave hands, callipers and straps. An entire package!

The “procedure” also requires some practice and forms a part of NASA training for new astronauts. Once positioned, they activate a suction system to evacuate solid waste. They are stored on-site in a purpose-built compartment and are routinely brought back to earth and disposed of.

They have a different system, however, for liquid waste. Each astronaut has a “personal collection unit” (sounds delightful), a kind of funnel that they attach to a pipe coming out of the walls of the station. ‘Naturally, there are different devices for men and women astronauts’ Hank explains. As for the ease of use of this paraphernalia, the blogger remarks ‘It’s actually easier for women’.

Be that as it may, astronaut’s urine all goes to the same place. It’s sucked up and collected in a sewage tank. Thanks to a device called the Water Recovery System, since 2008 the liquids contained in this compartment are distilled and purified to produce drinking water. According to estimates, the system produces nearly 6.8 tonnes of water per year by recycling, not only astronauts’ urine but also their sweat and their natural humidity. In the near future, NASA hopes to develop a device that will produce electricity for the station from wastewater. Well, waste not, want not!