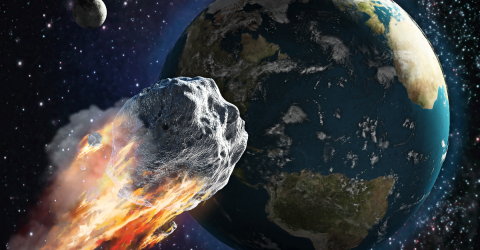 An asteroid passing by Earth in a decade is taken seriously (but not too seriously) by the American Space Agency. Let’s explain why.

It’s called Apophis and it was discovered in 2004. This very, very big space rock measures (around) 325 meters in diameter and is mainly made up of iron and scientists think that the asteroid weighs about 40 to 50 million tonnes. It was given its name because the researchers who discovered it were fans of the series Stargate SG-1, and one of the biggest characters in the series also had this name referring to the Egyptian God of chaos. At the time, the American Space Agency took a potential collision very seriously between this behemoth and Earth that could take place on a specific date: 13th April 2029.

But scientists assure us that NASA’s calculations predict that the asteroid should just brush past Earth from 30,000 kilometres away. The asteroid is now classed as Level 0 on the Torino scale, a way for scientists to calculate how likely a crash between near-Earth objects is.

POSSIBLE SOLUTIONS FOR THIS CATASTROPHIC EVENT

But that isn’t stopping NASA from preparing for the worst, since it was a similar collision that killed the dinosaurs and 99% of life on our blue planet all those years ago. Because you can never be too careful, NASA is coming up with several solutions to counter Apophis’ collision. Among some of their proposed ideas: sending a rocket into space which, thanks to a gravitational effect, could change the asteroid’s trajectory. A nuclear option has also been proposed by scientists.

But before talking about the end of the world, researchers are particularly enthusiastic about the idea of being able to study this cosmic rock in more depth. It is a great opportunity to learn more about this type of space object for scientists and, for us mere spectators, Apophis will be coming around in 2029 and will shine intensely and brightly as it passes close to our planet.