The largest ever comet has been discovered, and it's heading Earth's way

The Bernardinelli-Berstein comet is charging towards our solar system, and scientists believe it is up to 100 miles wide. 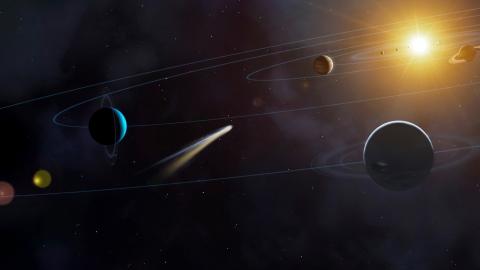 At least one major comet cruises through our solar system once every five years and most of them pose no particular threat to the Earth since they’re much smaller in comparison.

However, scientists have discovered that a comet twelve times the size of Mount Everest is charging towards our solar system—the biggest they’ve ever observed.

The comet was first discovered seven years ago by two astronomers from the University of Pennsylvania, Pedro Bernadinelli and Gary Bernstein. They named it the Bernardinelli-Berstein comet and they’ve predicted that this colossal flyingspatial object is up to 100 miles wide. To compare, an average ‘major’ comet is considered to be one that is 12 miles.

What the researchers are even more excited about is the kind of revelations a comet of this astronomical size will bring once it nears the Earth. Bernardinelli told Daily Beast:

The story told by the comet would tell us of what existed in the solar system billions of years ago.

We can use that to understand the things we see today elsewhere in the solar system.

Given that the comet has been relatively unchanged, scientists are hopeful that they can learn something new and previously known about the formation of the solar system. Bernardinelli added:

It’s pristine. Not a lot has happened to this object since its formation in the early days of the solar system.

We can think of it as a window into the past.

According to the two researchers, the comet will be entering our inner solar system in 2031. Luckily for us, mere citizens of the Earth, it will be 11 astronomical units (AU) away from our planet. For reference, one AU is the distance between the Earth and the sun.

If you've still got the Bernardinelli-Berstein comet on your mind in a decade, you should be able to get a glimpse of it through a telescope.