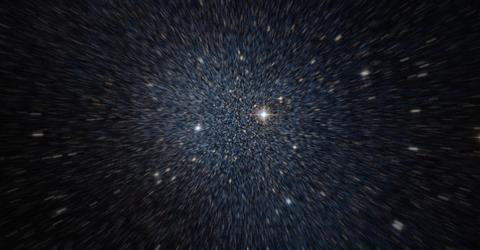 A ‘Dark Matter Hurricane’ Is About To Pass By The Earth

Hurricane seasons don’t just happen on Earth. According to researchers, a ‘dark matter hurricane’ could currently be blowing through our Solar System.

If the calculations made by astronomers are correct, our Solar System could be at the center of quite an alien cosmic event, a ‘dark matter hurricane’ moving at more than 500 kilometers a second. Although we can neither feel nor see it, this discovery could mean further scientific advances in the field of dark matter detection.

Dark matter is one of the biggest areas of interest in astrophysics. Just like black holes, we can’t actually see it, but we can infer its presence based on how it acts in the environment around us. It is probably not just down to the visible matter that explains the incredibly fast-moving stars and galaxies in our universe, and one component such as black matter provides the missing piece to this cosmic enigma.

Nowadays, this movement of the stars has led astronomers to assume that we’re in the middle of a hurricane composed of this mysterious matter. Data collected by the Gaia satellite last year revealed the existence of a stellar stream, the remains of a dwarf spheroidal galaxy that had been devoured by the Milky Way. Although numerous similar streams have already been detected in our galaxy, the 30,000 stars that make up this one seem to be heading right in our direction.

But don’t panic though, none of these stars are en route to crash into Earth or even change the balance of our Solar System. However, this event suggests that black matter travelling with the stellar stream S1 (which we’re interested in), will be passing right by us. Ciaran O’Hare, theoretical physicist at the University of Zaragoza and his team decided to calculate the effects of S1 on our corner of the galaxy.

One of the signs of black matter that could be identified by our detectors is known as WIMP, which stands for Weakly Interacting Massive Particles. However, researchers predict that for the time being, the signal is probably too weak to activate and make contact with our receivers. Our best chance to detect them is by using axion detectors, since these hypothetical particles are said to be the main components in dark matter.

By using a magnetic field that is strong enough, it is theoretically possible to convert these invisible entities into perceivable light. Researchers now understand a bit more about how to conduct this research, and if we are unable to detect them, they will be able to tune and refine their equipment in anticipation of the next hurricane. A Giant ‘Potentially Dangerous’ Asteroid Will Pass by Earth in March