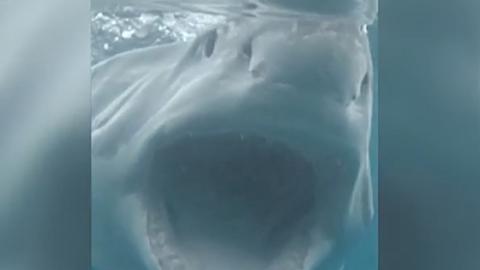 Two Australians took a big risk to photograph a great white shark up close. The images are worth it, since they are both impressive and terrifying!

Luke Thom and Andrew Fox are fearless divers. While in the Neptune Islands in southern Australia, a great white shark came up to meet their boat. They both immediately got out their cameras, since an incredible spectacle awaited them. The predator, which weighed nearly a ton, pulled its head out of the water and opens its jaws, giving a good view of its immense teeth which are as sharp as razor blades.

On board the boat, Luke Thom did not miss a thing and took several pictures of the animal. ‘I watched Andrew taking photos, and I decided to film him taking a picture of the animal. Since he uses a fish-eye lens, he can get very close to them,’ said the Australian. Andrew Fox is a shark expert whose work is recognised worldwide.

LadBible also published spectacular shots showing Andrew Fox's proximity to the shark coming out of the water to meet him. This totally crazy act could have cost him his life but it seems that human fascination for sharks is stronger than anything!

Take a look at the video above to see the breathtaking images for yourself...