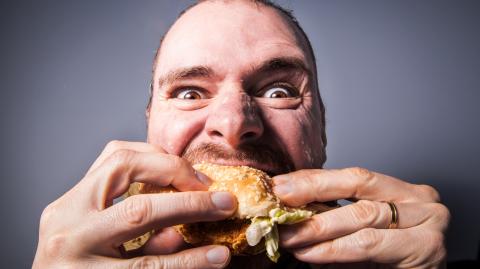 Have you noticed that you get angry more easily when you're hungry? How can an empty stomach lead you to blow a fuse? We explain the science behind this phenomenon.

Some people know this phenomenon very well: your stomach cries out in hunger and you feel yourself becoming more and more grumpy and irritable. This is what is called being 'hangry', a contraction of angry and hungry. But how can this strange phenomenon be explained?

The first thing that can make us irritable when we are hungry is hypoglycaemia, also known as a low glucose level. Our last meal, made up of mostly carbohydrates, protein and fat, has been digested and transformed into simple sugars like glucose as well as amino acids and free fatty acids. The latter are distributed, via our blood, to all of our organs to create energy.

The problem is that this does not last long: the longer it's been since we ate, the less energy we have. Our glucose level gets lower, our brain gets foggier and working gets difficult; concentrating, expressing ourselves, being polite and pleasant is difficult – it’shypoglycaemia! Eating again is necessary to nourish our body, find more energy and end our moaning.

But that's not all…

At the same time as this phenomenon, adrenaline also has a role to play inempty stomach hunger. Low glucose levels provoke a synthesis and liberation of hormones from several organs in the body to counteract hypoglycaemia. Among these hormones can be found the growth hormone coming from the pituitary gland, glucagon secreted by the pancreas, as well as adrenaline and cortisol which come from the adrenal glands.

This sudden release of adrenaline and cortisol – thestresshormone – can lead us to have an angry reaction. A phenomenon to which at last an explanation can be attached. When we are hungry, we release a natural chemical substance in our brain called neuropeptide Y, which acts on the Y1 receptor. Yet, aggressiveness and anger are equally regulated by this neuropeptide and this receptor.

Whilst a hangry person is not very nice to be around, it is actually a very natural reaction to get angry when we are hungry. This could even be considered a survival mechanism since, at the end of the day, to be able to live, we have to eat, even if that means fighting to find food. There you have it: you now know why it’s better to eat before an important meeting, and not after!