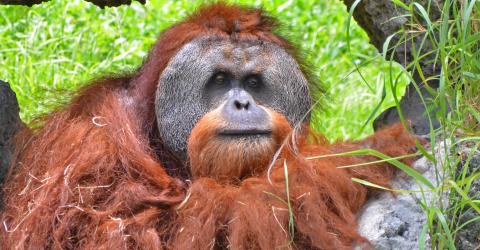 A study, led by researchers from the University of Saint Andrews and published in Science Advances, reveals that orangutans are the only primates besides humans to communicate about the past—specifically, to educate their young.

We’ve maybe never talked about orangutans quite as often as we have in recent weeks. First, a British advertisement aiming to educate the public about the consequences of deforestation for the species was censored; now, it’s their language capacity’s turn to make headlines. According to a study published in Science Advances last November 14th, it would seem that they are the only non-human primates to reference the past.

How does one warn a child about a potential danger? Either you yell in the moment to warn them, or you demand that the child remain silent to avoid being noticed, explaining why only after the danger is passed. With this latter method, there is a time gap between the explanation and the event itself. That very strategy is the one used by mother orangutans, according to a study led by University of St. Andrews scientists in the Ketambe forest in Sumatra, Indonesia, where orangutan behavior has been studied for forty years.

The scientists disguised themselves as predators (covered in colored and tiger-striped sheets) and, on all fours, approached mother orangutans perched with their young in trees around 15 to 30 high. They waited to be noticed, then waited two more minutes to see how the mothers reacted to the apparent threat. Only then did they leave the primates’ field of vision.

An average 7-minute wait before giving the alert

To their astonishment, the orangutans didn’t make any sound. Adriano R. Lameira, the main author of the study, described the reaction of an older mother orangutan with her nine-year-old child: ‘She stopped what she was going, grabbed her child, defecated (sign of distress), and started climbing slowly higher in the tree. She was completely quiet.’

The researcher and his assistants waited and waited: ‘It was frustrating. Twenty minutes passed. And then she finally did it.’ The female then gave a cry of alarm that sounded like a loud human kiss. ‘She called for more than an hour.’ On average, the female orangutans waited seven minutes after the ‘predator’s’ passing before beginning the alarm call.

Some believe it’s only paralysing fear that prevents them from crying out, but the scientists believe otherwise—after all, they were not too paralysed to climb higher in the trees to protect themselves and their offspring.

A way of educating the young

According to the specialists, the female voluntarily chose to remain silent in order to avoid her and her child being noticed by the predator. Then, once the danger had passed, she shared the information with the child to educate it. ‘Not responding immediately to a stimulus (in this case, a tiger) is considered a sign of intelligence,’ Adriano R. Lameira adds.

Professor Simon Townsend of the University of Zurich’s department of evolutionary biology—also interviewed by Science Mag—emphasizes: ‘the ability to discuss important events after they have happened is an element of language acquisition and cognitive development.’

Yet another remarkable ability from these primates that have already proven to have so much in common with us—and whose Malay name literally means ‘man of the forest.’