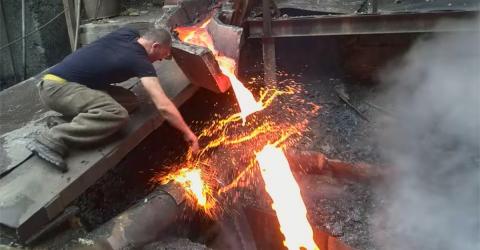 A video that appeared in December went viral because it shows a man passing his hand through a stream of molten metal and coming out unscathed. Here is the scientific explanation behind this experiment that you are obviously advised not to try.

First of all, we strongly advise against attempting to replicate this experiment. The melting point of aluminum is 660 ° C and it is generally necessary to exceed 1000 ° C to see a metal heated to white as on the video. Add to that that even though science assures us that passing one's hand quickly through metal is possible, the resulting splashes can be extremely dangerous.

When a drop is placed in contact with a heated surface above 160 ° C, its base evaporates. A kind of small gas cushion develops underneath the drop: it allows it to travel around by levitating and has the added advantage of ensuring its longevity.

Indeed, the air being a poor conductor of heat, it creates a protective barrier between the hot surface and the drop. Protected from a quick evaporation, the drop is able to move freely during several seconds until it disappears completely.

The same effect can be observed with liquid nitrogen. With a boiling point of -196 ° C, it vaporizes instantly when it encounters a surface at room temperature. And in the case of our viral video, it is the moisture on the human hand that is instantly vapourised, once again creating a thin layer of protective air that isolates it sufficiently, at least during the fraction of a second where the hand crosses the flow of molten metal.

#experiment
Contact
To ensure that we can best respond to your question, please choose your desired department
No connection
Check your settings