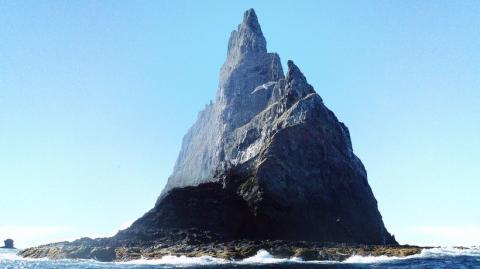 If you are not familiar with Ball's Pyramid, an island located off the coast of Australia, all the better, because you should never set foot there!

Discovered in 1788 in the Tasman Sea, Ball's Pyramid is not an island like the others. Firstly because there is no vegetation, except the Melaleuca, a small bush-like plant.

It must be said that this rocky 562 metre peak, located near Australia’s coast in the Pacific Ocean, is not ideal for sustaining any life form. How did it come to be? It consists of the remains of a 7 million-year-old volcanic chimney.

However, there are a few creatures that still venture out on the island: one can come across phasmids (a kind of stick insect) that can measure more than 15 cm long, or dryococelus australis, commonly known as the Lord Howe Island stick insect, that scientists thought had disappeared in 1930. They were rediscovered on the island in 2001.