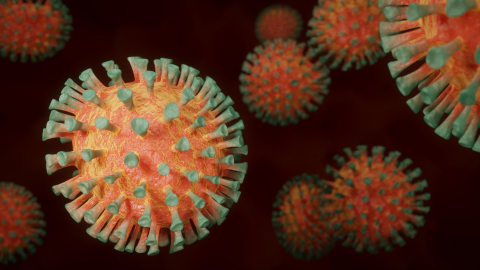 Scientists believe that the mutant strain of COVID that was discovered in the UK is probably already in the US, and could have even started there.

A new strain of coronavirus reported to be up to 70% more infectious was discovered recently in south-east England, causing many countries to place a travel ban from anyone coming in from the UK.

Despite this, cases ofthe strain have already been popping up all over the worldand have reached Australia, the Netherlands, Denmark, Italy, Belgium and Gibraltar with many more countries suspecting that the variant is also present but has gone undetected...And America is one of these countries.

Former head of the FDA, Scott Gottlieb, recently spoke to news outlet CBS, stating that the new strain has probably already infiltrated the United States and that a travel ban would probably do nothing to keep it out. He warned:

As the virus continues to spread around the world, we're going to start to see more of these variants.

A virologist from the University of Massachusetts, Jeremy Luban even believes that the new strain of the virus may have actually started in the USA. He revealed to the Washington Post that the virus may have only been detected first in the UK due to the country having access to a genome sequencing programme known as the ‘best in the world.’

A scientist on the UK’s advisory panel, Calum Semple, has even predicted that the highly viral new COVID variant may soon become the dominant strain seen around the world.

Angela Rasmussen, a virologist at the Georgetown Center for Global Health Science and Security, has stated that it wouldn’t surprise her if the virus has already reached America. She stated:

I don't think a travel ban is going to be particularly helpful. We already have out-of-control transmission of all the variants that are circulating in the US here. It makes sense that it was detected first in the UK because they have probably the world's best surveillance program.

New York Governor Andrew Cuomo also believes that it is highly likely that the new strain is running rampant, being that the City already struggled through the first wave of coronavirus.

When you do not require flights from the UK to be tested, you are allowing thousands of UK passengers to arrive here every day. Based on New York's experience in the spring, I believe this new, highly contagious strain of Covid-19 is already here.

Many airlines such as British Airways, Delta Airlines and Virgin Atlantic are already requiring all UK passengers to have a negative coronavirus test within 72 hours before flying. The US government is also considering a new rule of the same effect.

Meanwhile US neighbour Canada has put a 72-hour hold on flights from the UK, making it one of the43 countries that with a UK travel ban or restriction in place.

However, Marc van Ranst a virologist in Belgium believes that the new strain of the virus has spread further than we think, and told Bloomberg that it didn’t seem ‘completely fair’ to put a travel ban on the UK just because the strain was detected there first.

The travel ban comes after Prime Minister Boris Johnson sounded the alarm on the new strain over the weekend claiming it was 70% more infectious than the original strain. The announcement was made just 72 hours before the Christmas amnesty period was due to begin, despite the strain originally being detected back in September.

However, the 70% more effective figure has been argued by experts, who claim that it is too soon to tell if the new strain really is any more infectious than the original version of the virus.

Professionals already suspect that the higher infection rate of the new strain amongst children may actually be what’s to blame for the frightening figure as the variant could merely be more effective at attaching to human cells. This is also where the new variant differs from the original strain of coronavirus as the original variant struggled to infect children. Now, it seems both children and adults are on an ‘equal playing field’, resulting in a higher infection rate overall.

New Antibody Drug Providing Instant Immunity to COVID-19 in the Works by UK...

According to Scientists, This is When and How the Coronavirus Will End
Read also
No connection
Check your settings