From 6 pm on the 9th of October, Scotland will be placing a ban on alcohol sales in indoor hospitality venues and enforcing a 6 pm curfew as part of a major crackdown on coronavirus. And, the rest of the UK isn't so far behind. 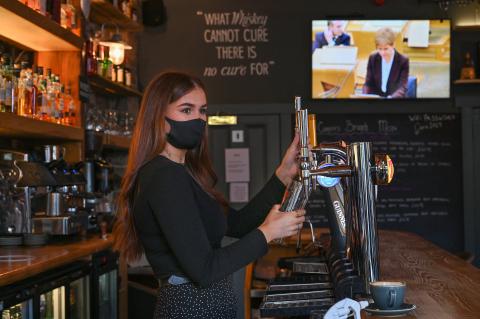 The newlockdown measures were announced by First Minister Nicola Sturgeon on Wednesday in an effort to control the spreading of coronavirus.

Sturgeon announced that all indoor hospitality venues will only be allowed to operate between the hours of 6 am to 6 pm selling food and non-alcoholic beverages only. Outdoor bars, restaurants and cafes will be allowed to continue to sell alcohol and adhere to the usual 10 pm curfew.

However, all indoor and outdoor licensed premises in Greater Glasgow and Clyde, Lanarkshire, Ayrshire and Arran, Lothian and Forth Valley health board will be closed for business. But, Cafes without a license to sell alcohol will still be allowed to stay open until 6 pm.

Therestrictionwill come into force on Friday the 9th at 6 pm and is set to be in place until the 25th of October at the least.

Sturgeon admitted that the rules seemed tough but deemed them necessary. She also denied that the country was heading towards another full lockdown and stressed that the hospitality crackdown was necessary to ensure people follow the strict social distancing and isolation rules. The first minister stated:

We know that more than one-fifth of people contacted by test and trace, report having visited a hospitality setting. All of these reasons, significantly restricting licensed premises for 16 days temporarily removes one of the key opportunities the virus has to jump from household to household. It is an essential part of our efforts to get the R number significantly below 1.

The SNP leader claims the curfew is part of a more ‘targeted approach’ that is intended to reduce the impact on local businesses. This adds a new method to the one back in March where almost all businesses were forced to close down. The rules will also be available for review in due time with Sturgeon informing the masses that ‘the more we comply, the more effective they will be.’ She spoke to the MSP’s stating:

These new restrictions will last for 16 days. They are intended to be short, sharp action to arrest a worrying increase in infection. However, although they are temporary, they are needed. Without them, there is a risk the virus will be out of control by the end of this month. But with them, we hope to slow its spread. That will help to keep schools and businesses open over the winter. And it will save lives.

Scotland will also be facing more restrictions in terms of social distancing and masks. People will now have to return to a two-metre distancing rule after previously being allowed to drop to one-metre to allow for more customers. Sturgeon will also soon be ensuring that masks will be worn in all communal settings across Scotland.

What about the rest of the UK?

Boris Johnson is set to follow in Sturgeon's steps and from Monday 10 million northerners will be forced into even tougher restrictions in what will be known as the ‘traffic light system’.

The what constitutes as a red zone is yet to be decided but it will most likely encompass areas such as Manchester, Liverpool and Newcastle where the rates of infection have been soaring the highest.

Red zones will be forced to endure the closing of hospitality businesses but shops, offices and schools will be allowed to stay open. The fate of hairdressers and leisure centres in the red zones is yet to be determined but all employees affected under the new system will be compensated financially.

As it is, Boris Johnson is struggling to keep others from fighting against the blanket10 pm curfewas politicians in Manchester, Liverpool, Newcastle and Sheffield have all accused Johnson of treating the north as ‘a petri dish for experimentation’.

There have also been complaints of the divide between the treatment of Northerners vs Southerners and the south has faced much looser restrictions, while those in the north are loosing more and more control over their daily lives.

Johnson signed off on the traffic light system and compensation measures last night but it is unsure when the system will be officially announced. Housing Minister Robert Jenrick hinted at the new hospitality restrictions and when asked if they would be announced on Monday he stated:

We are considering the evidence. In some parts of the country, the number of cases are rising very fast and we are taking that very seriously. If we do have to take further steps, then obviously we will take very seriously how we can help and support those individual businesses.

When asked to defend the system, Jenrick told BBC Radio 4 that it was down to common sense:

There is evidence that it plays a role. It is commonsensical that, with a virus that's transmitted through human contact, the longer one spends with individuals in indoor settings, in a pub or a restaurant, the more likely it is that we spread the virus.

UKHospitality executive director for Scotland Willie Macleod claims that many businesses won’t be able to survive the new coronavirus restrictions and believes that tens of thousands would lose their jobs. Kate Nicholls, CEO of the association in England also believes that the new system could be detrimental to the hospitality industry in the UK. She told BBC Radio 4:

In Scotland, £40million between 16,000 licenced premises equates to just over £2,000 for those people. It barely keeps the lights on let alone saves a job.