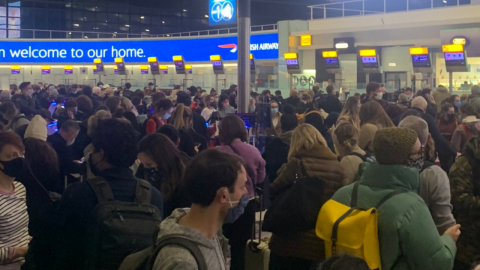 UK residents sent airports into chaos last night as hundreds attempted to flee the country ahead of border closures.

France, Ireland, Netherlands, Belgium, Austria, Bulgaria, Germany, Finland, Denmark Israel, Turkey, Morocco, Kuwait, Saudi Arabia and El Salvador, have all closed their borders to any flights carrying UK passengers for at least 48 hours, with some countries even closing their borders to the UK over new years while the new strain of coronavirus is being assessed.

The new coronavirus strain which was discovered in south-east England has been reported to be 70% more infectious and has plunged the region into a brand new ‘tier four’.

The pressure was on last night for the USA to also put restrictions in place for UK travellers after Justin Trudeau later announced that any travel from the UK will be banned for the next 72 hours. However, as yet the US has no plans to announce a travel ban for the UK.

The news of the border closures sent Heathrow airport into chaos last night as hundreds of people flooded terminal 5 awaiting news of a last-minute flight Aer Lingus to Dublin which had been drastically overbooked. The flight was given the green light by the Irish government and was set to land just 15 minutes before the midnight travel ban entered into play.

Irish residents have criticised those who tried to flee the country just hours before the travel ban came into effect by posting to Twitter, urging those in the UK to rethink their travel plans.

With all due respect guys, you are traveling from one of highest infected regions with a more infectious strain of #Covid_19..You guys run the risk of bringing it to #Ireland. Please consider staying put. It's hard I know.

Another person also tweeted, branding those travelling as selfish and putting vulnerable people at risk:

Pls rethink your plans. You risk bringing a more contagious strain of covid to Ireland. Elderly and vulnerable people are literally spending Xmas alone, inside afraid of seeing their families. Don't be selfish, flights from the UK to here are now being stopped for good reason [sic].

However, despite the risks of travel, those making their way to the republic from Northern Ireland will be allowed to do so with no hiccups.

Starting from today, Eurostar has also put in place travel bans London, Brussels, and Amsterdam. The company announced on their website:

Due to announcements from the French and Belgian governments that borders with the UK will close at midnight on Sunday 20th December, we are unable to run any trains from London to Paris, Brussels, Lille or Amsterdam on either Monday 21st December or Tuesday 22nd December.

However, the travel giant also revealed that trains would still be leaving from Paris to London on those dates and that all services would recommence from the 23rd.

We are also unable to run trains from Amsterdam, Brussels and Lille to London on these dates. We can confirm that our trains will continue to operate from Paris to London. The plan is to resume all our train services to and from the UK on Wednesday 23rd December.

How long will the travel ban last?

The Netherlands were the first to announce the UK travel ban amidst concerns over the new coronavirus strain found in the south-east of England. The government recently announced that the ban would last until the 1st of January.

All flows of people from the United Kingdom to France are suspended from midnight tonight, for 48 hours, and for all means of transport.

Germany has also announced a ban on all UK travel with the exception of cargo flights. According to Deutsche Presse-Agentur, the ban is set to last until at least the 31st of December.

Italy has also joined the ranks of those with a longer travel ban in place as they signed a document this morning, restricting all those who have been in the UK in last 14 days from entering the country. The order will also be banning plane travel entering the country from the UK until at least the 6th of January.

Meanwhile, Belgium’s travel ban, including both flights and trains from the UK will only last for 24 hours.

El Salvador also has a travel ban from both those in the UK as well as South Africa, where another new strain of the virus has also been discovered.

Concern from other countries stems from the new coronavirus strain fund in England. The new strain was initially discovered back in September, however, come November nearly a quarter of COVID-19 cases in London stemmed from the new variant. A number which has now reached two-thirds.

The variant is currently under the close eye of scientists but it is still too early to determine whether or not the new strain will bring any serious new concerns. Despite this, the variant has been reported to be 70% more infectious, causing many cities in the south-east and central-east to be plunged into tier four over Christmas.