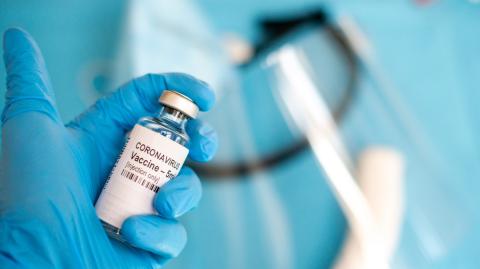 Hope is once again on the rise as a 90% effective vaccine is being developed by Pfizer and BioNTech SE and the UK has already ordered over 40 million doses.

After a hard year, the world has now been gifted the great news of a breakthrough coronavirus vaccine. The vaccine currently being developed by Pfizer and BioNTech SE has already been proven to be 90% effective sparking hopes that a cure for COVID will be available before the end of the year.

The vaccine being developed by Pfizer, based in New York, and Germany based BioNTech, have claimed that there have been no serious safety concerns and are aiming to authorised for emergency use later this month.

Pfizer and BioNTech have been the first so far to be able to test a vaccine through a large scale clinical trial and successfully at that. The vaccine has been tested on over 43,500 people in six countries with no serious consequences which is a huge victory against the virus that has already claimed over 1 million lives across the globe.

An announcement was made on Downing Street this morning stating that the UK has already ordered over 40 million doses of the BNT162 coronavirus vaccine. And, if approved by regulators, then 10 million doses (which would cover 5 million people) could be available before the end of the year.

However, the vaccine is still undergoing trials and will take until the third week of November before it will be able to send off a dossier for approval.

Pfizer has stated that an interim analysis conducted on the vaccine after 94 participants in the trial developing COVID-19, the examination revolved around how many of the patients received the vaccine versus a placebo.

The company did not reveal in solid numbers just how many participants who received the vaccine went on to develop the virus but over 90% effectiveness is already a win considering the FDA standard for efficacy is just 50%.

This means that no more than eight of the 94 people in the trial has been given the vaccine (two shots, three weeks apart).

To further confirm the efficacy rate the interim analysis will continue until there are 164 coronavirus cases among the participants which could be achieved by early December. This means that the efficacy rate of the vaccine may still change during the following weeks. But still, 90% is a good start and has given hope to both the UK and US government.

Thinking forward, the companies already started producing the vaccine before they knew whether or not it would work in a prediction of future demand. Now, the companies are well on their way to producing enough vaccines for 25 million people before the end of the year and up to 1.3 billion doses in 2021.

Today is a great day for science and humanity. The first set of results from our phase 3 Covid-19 vaccine trial provides the initial evidence of our vaccine’s ability to prevent Covid-19. We are reaching this critical milestone in our vaccine development programme at a time when the world needs it most with infection rates setting new records, hospitals nearing over-capacity and economies struggling to reopen.

Bill Gruber, one of Pfizer’s top vaccine scientists also shared his excitement in an interview:

I’m near-ecstatic.This is a great day for public health and for the potential to get us all out of the circumstances we’re now in.

When will the vaccine be available?

Currently, around 12 COVID-19 vaccines around the world are in their final stages of testing but Pfizer and BioNTech’s vaccine is the first to report any significant results sparking hope that at least one vaccine will be able to be rolled out over the new year.

Sir John Bell, regius professor of medicine at Oxford University and a member of the Government's vaccine task force also believes that other vaccines will soon be coming forward also sporting great results. He told BBC Radio 4's The World at One:

I am really delighted with this result - it shows that you can make a vaccine against this little critter. Ninety percent is an amazing level of efficacy. It rolls the pitch for other vaccines because I can't see any reason now why we shouldn't have a handful of good vaccines.

Bell has even jumped to the conclusion that people will be able to expect to be back to their normal lives by the spring. When asked about the issue he responded:

Yes, yes, yes, yes. I am probably the first guy to say that but I will say that with some confidence.