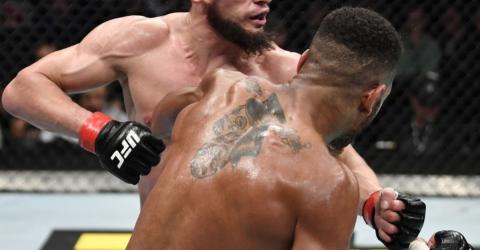 In the main card of UFC Moscow, Danny Roberts scored a remarkable knockout against Zelim Imadaev.

Danny Roberts is an English mixed martial artist who competes in the Welterweight division of the Ultimate Fighting Championship. A professional since 2010, he has also competed for Cage Warriors, and just gave us the proof he earned a spot among the greats.

Following two consecutive defeats, Danny Roberts stepped into the ring at the CSKA Arena with no choice but to make up for his losses. Facing Zelim Imadaev in a welterweight fight, the Brit was fearless, accepting the challenge, as usual. Tough but still relatively young (24 years old), the Russian fighter slowed down in the second round, leaving Roberts an opening to land some strikes.

With just a few seconds remaining in the second round, Danny Roberts put Imadaev to sleep with a left hook. The Russian fighter, who was knocked down and totally out of it, was saved by the referee, granting Danny Roberts the 17th win of his MMA career, and one of the most spectacular ones at that!

SPUN HIM 360! 👊 @DanHotChocolate has done it again! Add it to the highlight reel! #UFCMoscow 🇷🇺

After this successful operation on the enemy's turf, Danny Roberts has earned back his spot in the 170-pound division.