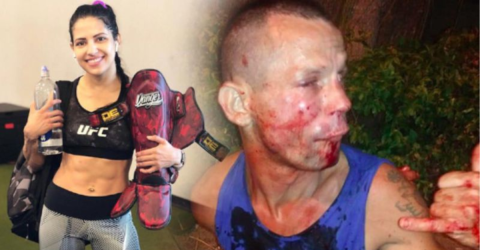 First bad idea of the year? Trying to steal a phone from a UFC fighter.

There is a new episode ofthieves vs UFC fighters, this time featuring UFC fighter Polyana Viana. It was early Saturday evening that this bantamweight fighter taught a lesson to a man who tried to steal her phone, not far from Rio de Janeiro.

In an interview given to the American media MMAJunkie, the fighter described the attempted robbery:

"He sat next to me and asked me for the time, and I saw that he was not going to leave. He said 'Give me your phone. Don’t try anything because I'm armed'. He was really close to me, so I thought if he had a weapon he would not have time to use it. I got up, punched him twice and kicked him. He fell, I put him in a headlock and I told him, 'Now, we're going to wait for the police'."

An experience that the thief in question will not forget any time soon, given the damage that he sustained. Polyana Viana has twelve MMA fights to her credit. Ten victories, all obtained before the final bell, and two defeats. A valuable lesson all muggers should: make sure it's not a UFC fighter!