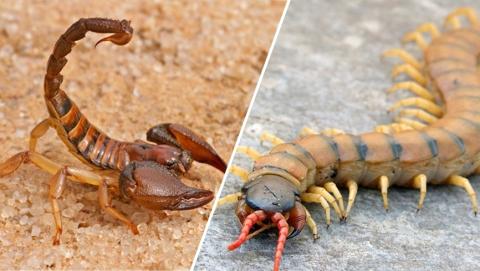 Contrary to popular belief, the centipede and the scorpion are both effective and dangerous warriors. In this video, try to figure out which of the two came out alive from this merciless duel.

One shouldn’t judge a book by its cover! The most dangerous things is not always the one with the visible weapons... You can see for yourself in this footage, which shows a rather improbable fight between a centipede and a scorpion. Very quickly, the outcome of the fight seems uncertain. Indeed, the beast with many legs is a much tougher opponent than one might have thought at first glance.

The desert centipede feeds on scorpions as well as snakes and rodents. Those are quite the predators for this small animal! Very skilled at rolling onto itself, it uses its body and legs to hold its prey and fatally injects them with its terrible venom. One could think it is a bite but it is actually a pinch that releases toxins into the body of its target. Fast and effective.

Is it still necessary to introduce the dangerous scorpion? A distant relative of the spider, it does not hesitate to challenge its distant cousin to a duel. A thousand species exist around the world and all are venomous. But only twenty of them can deliver bites that are fatal…for humans! Though its vision is not very good, which can be a handicap in some of its battles, it can count on its tail which has an attachment filled with venom. It will use the latter as a fatal weapon to neutralise its future meals consisting of large victims, such as rodents or snakes. As for its very effective claws, it uses them to capture its more modest prey like insects. So who will win in this clash of the titans?

Check out the video above to see this epic battle for yourself!