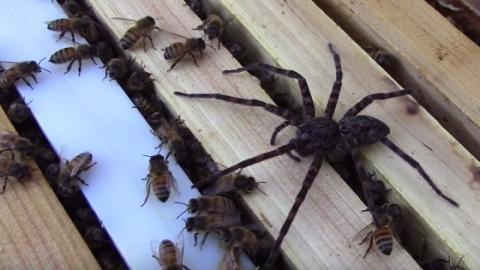 A video that was recently published online shows the amazing encounter between a spider and bees. Despite the spider’s threatening demeanour, the bees didn’t hesitate to fight back.

Spiders are known for being dangerous predators, but that doesn’t mean that they never come across something stronger than they are. This amazing encounter, filmed by a beekeeper from South Carolina, proves just this. When he was checking one of his hives, he noticed a spider, or more precisely, a spider from the Dolomedes family, that was crawling around on the outside.

These spiders, known as fishing spiders, are relatively large species and mainly feed on insects that they catch on land, but also on the surface of water. In comparison to other types, they don’t use webs to hunt, but prefer instead to catch their prey by themselves.

According to the beekeeper who had already spotted these intruders not far from his hives, it was very clear what this Dolomedes was doing when he found it near the beehive; it was looking for its next meal. As he was used to filming his bees, the beekeeper then did just that, immortalising quite a surprising event.

When the bees attack

At first, the spider was barely moving and not very quickly, so the bees didn’t seem to be threatened. “Bees do not pay attention to this spider yet, because they do not see any danger,” explains the beekeeper in the description. However, the predator didn’t stay still for very long and the bees were quick to fight back.

Before the spider could attack the hive, the bees rush towards it, stingers at the ready, and proceed to sting the spider everywhere. Because it was under attack by so many of the bees, the spider found it difficult to fight back. “The bee venom paralyses the spider within seconds but the bees do not want to stop. More and more bees are coming to help,” says the beekeeper.

More new attackers then join the fight until the intruder didn’t seem to show any sign of life and its legs had curled up. Little by little, the bees left their victim, but not all of them. “The spider is completely destroyed but some bees want to make sure that the enemy is not going back and bite,” concludes the beekeeper.

This encounter shows once again just how important numbers are in comparison to the size of the enemy you’re fighting. Bees are definitely the experts in this field and some species can lead some pretty ingenious attacks to take down their enemy.

This is the case for Japanese bees that create a sort of “hot ball” to defend themselves from giant hornets. As we would have assumed, bees also don’t hesitate to sting their enemies with their powerful venom. Although bees die very often after they sting a human, this isn’t true for all insects, who can sting their enemies numerous times.

Check out the video above to see the fascinating encounter for yourself!