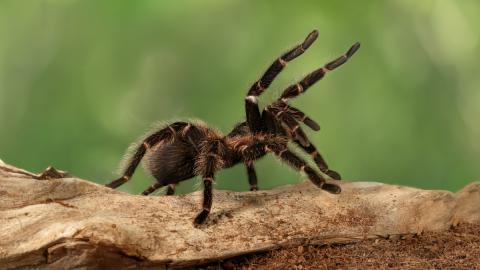 Arachnophobes, look away now! The footage in the video above is chilling. In the middle of the forest in Guyana, an entomologist found himself face to face with a huge arachnid back in 2014. Which arachnid, we hear you ask? A Goliath spider, renowned for being the largest spider in the world.

Venturing into a tropical forest can sometimes lead to some rather surprising and impressive encounters and one person who can definitely testify to this is Piotr Naskrecki. The entomologist from the Museum of Comparative Zoology at Harvard University is used to going out into the field to observe insects in their natural habitats. But one day, his exploration took an unexpected turn, as he reported on his blog back in 2014.

‘I couldn’t quite understand what I was seeing’

A few years ago, while exploring Guyana’s rainforest at night, Piotr Naskrecki heard a suspicious noise. The entomologist explains:

I was deep in the rainforest of Guyana […] listening to the sounds of the night in complete darkness - when I heard the rustle of an animal running. I could clearly hear its hard feet hitting the ground and dry leaves crumbling under its weight.

He expected to see a small mammal, maybe a possum or a rat, but it turned out to be something quite different.

‘When I turned on the light, I couldn’t quite understand what I was seeing,’ he continued. The brown, hairy creature looked about the same size as a rat, but after a second glance, he realised that it was not a rodent. A big body with eight legs slowly started to take shape: it was a Goliath spider.

The biggest spider in the world

Goliath spiders, also known as Goliath birdeaters (Theraphosa blondi) are impressive arachnids. According to Piotr Naskrecki’s statements on LiveScience, its legs can extend over 30 centimetres, like ‘a child’s forearm’, and its body can be as wide as a ‘large first' As for its weight, the spider can reach up to 170 grams, which is about the same as a young puppy.

Unsurprisingly, its measurements have earned the Goliath spider the title of the largest spider in the world, even appearing in the Guinness Book of World Records.

‘Because of its gargantuan size, the Goliath birdeater is probably the only spider in the world that makes noise as it walks. Its feet have hardened tips and claws that produce a very distinct, clicking sound,’ wrote the scientist on his blog.

But that’s not the only noise that this rather aggressive spider makes. When Piotr Naskrecki approached the spider, it began to rub its hind legs against its abdomen.

‘’Oh, how cute!’ I thought when I first saw this adorable behaviour until a cloud of urticating hair hit my eyeballs and made me itch and cry for several days,’ he explains.

The Goliath birdeater is particularly gifted when it comes to defending itself and attacking. The stridulation that the entomologist observed is usually a first warning sign before the predator throws the stinging silks at its attacker in order to dissuade it from getting any closer. For Piotr Naskrecki, this was obviously enough of a warning, but the spider didn’t seem to think so and decided to use its other weapon: a pair of 2-centimetre-long fangs.

Goliath spiders produce a venom which luckily is not fatal to humans. However, these fangs are both large and powerful and can be very painful if you are bitten. It would be ‘like driving a nail through your hand,' says the entomologist. But even if it does bite you, ‘a chicken can probably do more damage.

According to a study conducted back in 2005, the gargantuan size of the Goliath spider, which is only active at night, is linked to the fact it has a slower metabolism than its cousins and which allows it to reduce its oxygen needs. Its large size also allows it to tackle larger prey.

Despite its nickname ‘birdeater’, the Goliath spider doesn’t actually appear to feed on birds. However, it is able to catch and kill small mammals, particularly rodents, as well as frogs and insects which are sometimes larger than itself.

‘They will essentially attack anything that they encounter,’ claims the entomologist.

According to the scientist, its main prey is actually earthworms which come out of the ground whenever there is a little moisture.

‘Earthworms are very nutritious,’ he adds. With a lifespan of over 10 years for females, Goliath spiders are not that common. After more than 15 years spent exploring the forests of South America, Piotr Naskrecki is said to have only encountered three.

A couple of years after my first encounter with Theraphosa blondi I was in South America again, walking alone at night in the rainforest of Suriname. Suddenly my foot brushed against something big and moving, and I nearly tripped. I froze, expecting a snake. ‘Nah, it’s just another Goliath birdeater.