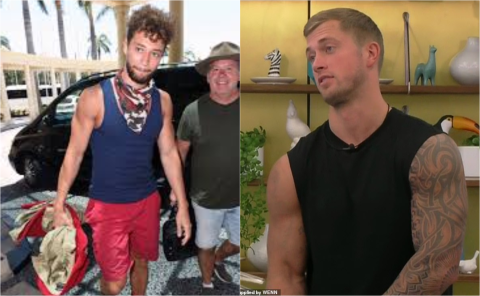 As Myles Stephenson became the sixth celebrity campmate evicted from the jungle on Thursday night, Jacqueline Jossa’s husband Dan Osborne was conspicuously absent from the group of families and friends that greeted him at the luxury Palazzo Versace hotel as it’s claimed he ‘fled’ to his room to avoid him.

We’re almost at the end of this year’s series of I’m A Celebrity… Get Me Out Of Here! and half of this year’s campmates have now left the jungle to rejoin their friends and family in the luxurious Palazzo Versace hotel. However, now that Myles Stephenson is out, there could be some awkward moments in store for him and Dan Osborne.

In unseen footage, Myles reportedly told Jacqueline Jossa – who is still in the camp – that he believes her husband Dan cheated on her with his ex Gabby Allen. Whilst Dan has denied these claims and rubbished reports he was in emergency ‘crisis talks’ with Jac, he hasn’t held back on his feelings about Myles.

Following the reports and claims that there could be a romantic spark between his wife and the 28-year-old Rak-Su singer, Dan told his Instagram followers that ‘she would not be attracted to Myles even if she was single, no kids, no nothing lol. He can try all he wants though, bless.’ When questioned about what he’d say when he came face to face with Myles, Dan claimed that he was ‘the last person on [his] mind’.

Now, Dan has been noticeably absent from photos showing Myles reuniting with the rest of the I’m A Celeb stars’ family and friends. A source who was present claimed to The Mirror that Dan ‘fled’ to his room, saying: ‘It was very obvious Dan was missing because he was the only one not there. He seemed keen to keep a low profile.’

Meanwhile, there was no sign of friction between Myles and Jacqueline in camp, as Thursday night’s episode showed Myles reading aloud Jacqueline’s letter from Dan – which left her in floods of happy tears. However, many fans described the moment as ‘awkward’ considering the tabloid stories…