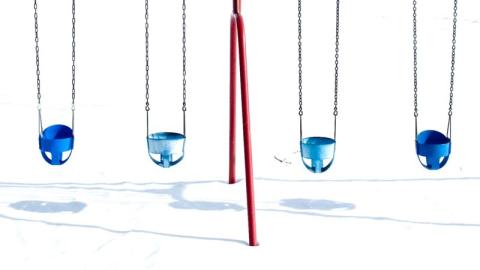 The internet is full of optical illusions nowadays, but the latest to date has been driving internet users crazy. Find out why the internet is currently so divided.

Whilst you still may be trying to figure out this photo of mountains and a lake (or mountains and a wall), the internet has just spat out another optical illusion for you.

Someone on a swing set

In the recent, viral optical illusion, you can see someone on a swing set in the snow outside a building. So far so good. However, in the background of the video, you can hear the person filming and their friends ask a strange question: which direction is the person facing? And that’s it.

Before being shared on all social media networks, this optical illusion first appeared on TikTok. It very quickly reached Twitter and started driving fans of things like this crazy. As a result, theories quickly started flowing and sides started to form. Nobody could figure out if the person in the distance was facing the camera or the building.

‘The brain chooses to ignore one of the poles’

Ever since it appeared, twitter users have been tearing their hair out trying to figure it out.

‘I can’t figure out which way he is facing…’, ‘He’s facing the building, not the camera, I’m sure of it!’ I mean, look at his legs and his knees. You couldn’t bend your knees like if you were facing the camera’ some users said. Another user, however, decided to do the calculations.

‘It’s very simple... Look at the angle in front of the swing set and the direction he’s going… He is facing the camera.’

‘Right, we have a situation here with not a lot of detail, a lot of contrast, and the angle of these three posts can correspond to two different layouts. The brain chooses to ignore one of the poles so it can determine the orientation of the frame.’ So? What do you think? What direction do you think the person is facing?