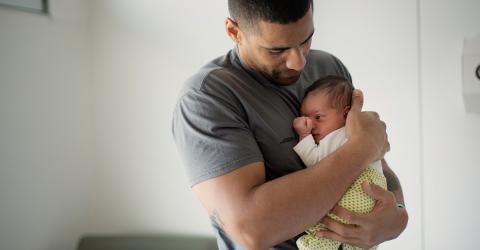 Scientists have known for a long time that the quality of sperm declines as a man ages. Where women’s fertility ends at menopause, men can theoretically continue procreating up until the end of their lives. But according to a study conducted recently, there is a biological clock ticking for men too and it would be recommended to freeze sperm before a certain age if you're hoping to conceive later in life...

Men have a ticking biological clock too! This was the conclusion of a recent study, published in the journal Maturitas of the European Menopause Journal, which reveals that late paternity can sometimes lead to a complicated pregnancy. In the past, other scientific studies have proven that it is not only the age of the mother that is taken into account when it comes to the health of the baby.

When the father is older, there are also risks including pregnancy complications and a higher chance of the baby being born with congenital or cardiac diseases. Scientists have therefore determined at what age a pregnancy can be considered with the least possible risk.

According to the researchers, the age "limit" is set at 35 for the father. In the case of women, it is considered that fertility begins to decline a little earlier, at the age of 30. At present in the UK, the average age of becoming a parent is 29 for women and 33 for men.

Take a look at the video above for more information...