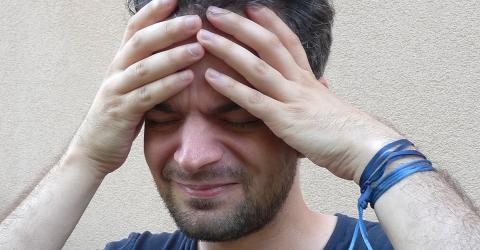 Danish researchers have come up with an innovative solution for the treatment of migraine attacks. With a simple inhaler, gases reach the brain to dilate the blood vessels, and thus promote oxygenation. Effective treatment from the first seconds of use according to its designers.

A simple breath of fresh air to treat headaches... A dream for all migraine sufferers that could well become reality thanks to a device developed by Danish researchers. Presented in a Cephalalgia publication, this innovative solution is the work of a team from Aarhus University, the second largest in the country behind that of Copenhagen.

Rather than a complex drug treatment, it is a device of disconcerting simplicity imagined by researchers: a small inhaler that produces its first sedative effects in a matter of seconds. Its secret: gases that act directly on the mechanisms causing migraine, as revealed by one of the co-authors of the work, Troels Johansen, doctor of the Department of Clinical Medicine and specialised service in the treatment of migraines from Aarhus University Hospital.

Mimic the natural processes of defence of the brain

"We use CO2 [carbon dioxide] and oxygen, which are the natural molecules of the body to mobilise its own defences against migraine attacks.The inhaler dilates more than 70% the blood vessels that feed the brain with oxygen and stop the chain reaction destructive,” says the scientist.

Migraines are indeed the result of the contraction of the blood vessels irrigating the brain, and therefore is no longer sufficiently supplied with oxygen. This causes a sensation of pain. A hitherto implacable process that seems to be able to be countered effectively, as the pilot study carried out by the researchers shows.

Between 2016 and 2017, 11 patients agreed to test the inhaler. They suffered from a particular form of migraine: ophthalmic migraine, a type of headache preceded by visual disturbances, particularly impressive but generally not serious. As a result, 45% felt relief from the first use. A rate that even climbed to nearly 80% in a second shot.

"The study shows some important psychological effects on the body," says Troels Johansen. Efficacy observed in a limited number of patients, but the researchers intend to demonstrate on a larger scale in a clinical trial that includes patients suffering from ophthalmic migraines, as well as chronic headaches without visual manifestations.

If this second validation phase confirms the effectiveness of the inhaler, it is an imminent commercialisation that certainly awaits the device. Troels Johansen and members of his team have already initiated the production phase of the device by founding the company BalancAir. The promise of a breath of fresh air for all migraine sufferers.

New Study Shows That Marijuana Could Be The Best Remedy For Two Serious Health...
Read also
No connection
Check your settings