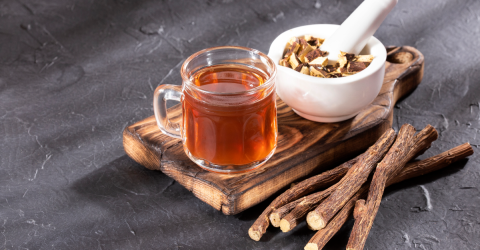 An 84-year-old man has been hospitalised after drinking a liquorice-infused tea twice a day for two weeks.

In an article published in the Canadian Medical Association Journal, some doctors from Quebec tell a strange story of a patient who was a bit too fond of liquorice-flavoured hot drinks.

A delicious, yet dangerous drink

The doctors explained that the man was known to have high blood pressure but he had succeeded in controlling it up until now. However, this did not stop the patient from consuming his favourite drink twice a day which had caused his blood pressure to rise to 210 mmHg.

What is high blood pressure?

High blood pressure is when the pressure exerted by the blood on the arterial walls is higher than normal. This problem can cause various complications such as cardiovascular problems, kidney failure and intraocular pressure.

But why is liquorice bad for your health?

Liquorice is made with glycyrrhizin, a heteroside substance commonly known for its sugary flavour and for its use as a sweetener. Unfortunately, glycyrrhetinic acid taken in large amounts can increase your blood pressure.

Doctor Jean-Pierre Falet explains that “consumed in excessive quantities, some herbal teas can have a harmful effect on your health”. Products containing liquorice can increase blood pressure, cause water retention and lower the levels of potassium in the blood when it is consumed in excess. The 84-year-old man, whose case was brought to light in the scientific review by Canadian Medical Association Journal, had been hospitalised for 13 days. His blood pressure has slowly but surely improved and he was able to return home after nearly two weeks in hospital.

#stories
Contact
To ensure that we can best respond to your question, please choose your desired department
No connection
Check your settings