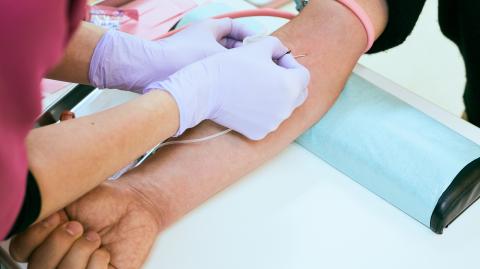 Gay and bisexual identifying men in the UK will very soon be able to donate blood to those in need.

The UK will be lifting its ban on gay and bisexual men to donate blood by allowing those who have had sexual intercourse with only one other partner in the last three months to give blood.

This is a huge milestone for the LGBTQ+ community as, previously, gay and bisexual men were universally banned from being able to donate blood if they had had a sexual encounter with another man in the past 3 months.

The decision to include more gay men came after the Advisory Committee for the Safety of Blood Tissues and Organs (SaBTO), backed by a report by the For Assessment of Individualised Risk [FAIR] steering group, recommended an individualised risk-based approach, rather than a total ban.

This landmark change to blood donation is safe and it will allow many more people, who have previously been excluded by donor selection criteria, to take the opportunity to help save lives.This is a positive step and recognises individuals for the actions they take, rather than their sexual preference.

And Su Brailsford, Associate Medical Director at NHS Blood and Transplant, said that this is the beginning towards a more inclusive criteria selection:

Patients rely on the generosity of donors for their lifesaving blood and so we welcome the decision to accept the FAIR recommendations in full. We will keep collaborating with LGBT representatives, patients and donors so when we make these changes our process for getting accurate donor information about sexual behaviours is inclusive and done well

The movement was catapulted following 28-year-old Ethan Spibey's campaign Freedom To Donate, for which he set up after he was denied the possibility to donate blood to his grandfather who required 8 pints of blood for a life-saving operation.

This will not only allow more lives to be saved but also de-stigmatize HIV-related fears that still remain within society–a huge feat for the LGBTQ+ movement. The changes will come into effect in the summer of 2021.

Watch the interview with Ethan Spibey on SkyNews in the video above.